“A remote rehab for restless souls” 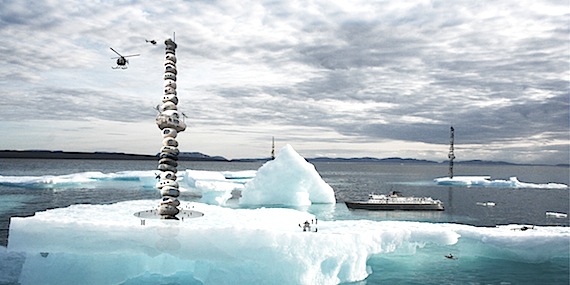 Inspired by a 2007 visit to Nunavut, Toronto architect Reza Aliabadi came up with a design for Arctic skyscrapers, which satisfy the human desire to escape gravity and have a good view. (IMAGE COURTESY OF R. ALIABADI) 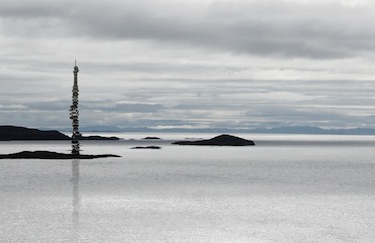 Here’s an artist’s take on the Nunavut Tower, which architect Reza Aliabadi describes as “a vertical cave,” reflecting the materials and the design of inuksuit he saw during his 2007 visit to Nunavut. (IMAGE COURTESY OF R.ALIABADI)

Four years ago, when he was frustrated and fed up with his life and work in Toronto, architect Reza Aliabadi decided to head north.

The result of his 10-day Nunavut trip in 2007: a unique design for a skyscraper, which he calls the Nunavut Tower.

In August, 2007, Aliabadi quit his job at an architectural firm in Toronto and started looking for “the farthest destination I could escape to in Canada.”

That turned out to be Iqaluit, at least travelling by jet — but that wasn’t far enough north for Aliabadi.

The landscape there provided a dramatic change for Aliabadi who grew up in a dense metropolitan area, where his life was defined by streets and avenues, plazas, malls and condos.

His trip out on the land near Pond Inlet provided “a real release of all those definitions,” Aliabadi said in an interview from Toronto.

And it spurred the architect, who now runs his own office in Toronto, to alter his view of space and what buildings are meant to do.

Generally, tall buildings are meant to give people freedom, an escape from gravity, and a view — but in the city that effort fails, Aliabadi said.

“You don’t achieve the goal,” he said.

The only thing people end up with is an address, he says, because they end up peering into the windows of neighbouring tall buildings.

But put a skyscraper up in an Arctic landscape, and the height of a building works — and there’s “no notions about address, it’s all about view, your imagination, your eyesight.”

The competition said submissions should bring a fresh approach by adding density to a landscape in the form of skyscrapers.

What Aliabadi came up with was his design for the high-density residential Nunavut Tower, which he calls “a vertical cave,” made with local stone and relfecting the inuksuit he saw in Nunavut.

The tower is “a remote rehab for restless souls, a vertical expansion on an extremely flat horizon, a resort that becomes a mobile structure by sitting on icebergs of Nunavut where scenery and ambience is the subject of constant change.”

In the winter, the Nunavut Tower would be “a perfect environment for a nocturnal delirious restless mind to escape to.”

Aliabadi’s design — which didn’t win the competition — sounds interesting, but would people in the Nunavut like it?

Aliabadi isn’t sure: “most people be met the people I met up there were trying to keep their traditions alive.”

“It doesn’t say anything, but I was inspired by the landscape and the sculptures Inuit built,” he said.

However, it’s not likely that the skyscraper designed by Aliabadi could ever be built — despite the elaborate artist’s rendition of the complex out on the sea ice.

Aliabadi says his design was just that — a concept — and not a blueprint for a real building.

In Toronto Aliabadi continues to design and build intriguing structures that make the most of space they’re in.

That’s what architecture is all about, he said — “how to treat the emptiness, to respect the space not to fill it up” — a philosophy he’d be interested in trying out on a design for a building that would actually be built in Nunavut.