“No room for conflict and confrontation” 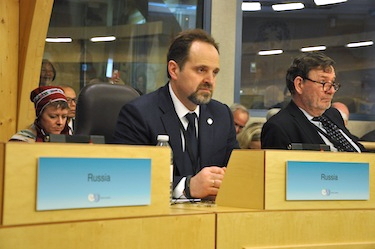 Sergei Donskoi, Russia’s minister of Natural Resources and Environment, waits for the Arctic Council ministerial to start April 24 in the legislative assembly chamber of Nunavut. (PHOTO BY THOMAS ROHNER) 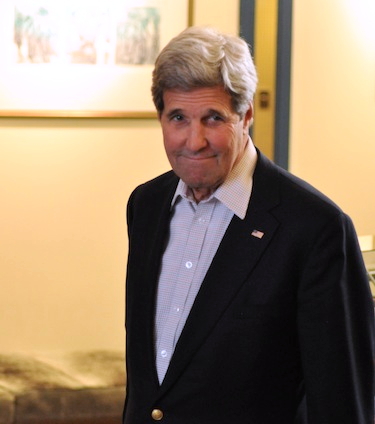 U.S. Secretary of State John Kerry in the lobby of the Nunavut legislative assembly where he talked about the Arctic Council’s role under the U.S. chair from 2015-2017. (PHOTO BY THOMAS ROHNER)

In the end, those who thought that the April 24 Arctic Council ministerial meeting in Iqaluit would be disrupted by disputes with Russia over its actions in Ukraine were wrong.

“No matter what is happening in the outside world, Arctic co-operation must continue,” said Sergei Donskoi, Russia’s minister of natural resources and environment.

Stability, peace and cooperation is the most important focus for the Arctic Council, he told the ministers gathered inside the Nunavut legislative chamber.

And there is “no room for conflict and confrontation,” he said.

That was a message echoed by many other ministers who also spoke during the ministerial meeting.

And, most importantly, from United States Secretary of State John Kerry, who made references to the “peaceful goals we all seek here” and the “sense of trust” among the Arctic Council’s eight member states.

If there is a common enemy in the Arctic, for Kerry, it is climate change.

“We have laid the groundwork to meet a very tough set of challenges,” Kerry said.

As chair of the Arctic Council for the next two years, Kerry said the council, under the theme “One Arctic,” will focus on the interconnected themes of the impacts of climate change, promoting ocean safety, security and stewardship and improving living conditions around the Arctic.

Kerry said he wants the Arctic Council to be the premiere organization to address these Arctic challenges — although he noted that “all countries have a reason to care about the Arctic,” which is “warming faster than any other place on Earth.”

The U.S. will do everything to protect worse impacts from taking place, Kerry vowed.

“We cannot afford to take our eye off that ball,” he said.

On that the Arctic Council can do more — such as working on an agreement to reduce black carbon emissions among the eight Arctic Council states, who Kerry said contribute 60 per cent of the problem — and on ways to prevent oil spills and more ocean acidification.

At the end of the gathering, Kerry took the gavel from Aglukkaq and ministers signed the Iqaluit Declaration to bring their ninth ministerial gathering to a close. U.S. Secretary of State John Kerry at the post-ministerial news conference in Iqaluit’s Cadet Hall: the Arctic Council is not the place to address security or military issues, but where there are “legitimate concerns,” they will be discussed in other forums. “There are many different ways to approach those challenges without diminishing the capacity of the council to build the kind of consensus that it has built thus far.” (PHOTO BY THOMAS ROHNER)