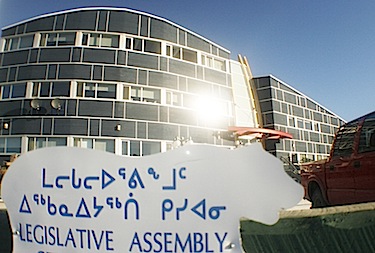 Nunavut MLAs voted May 9 to support a motion to asking the Arctic Council to deny the EU observer status. (FILE PHOTO)

They voted in favour of a May 9 motion, put forward by Nanulik MLA Johnny Ningeongan, declaring that the EU be denied observer status at the Arctic Council, whose top ministers meet May 15 in Kiruna, Sweden.

There, they’ll decide whether to accept 14 applications for observer status.

Right now, the EU and China hold “ad hoc” observer status, which means they must seek permission to attend each Arctic Council meeting.

Only six nations — France, Germany, the Netherlands, Poland, Spain and the United Kingdom — enjoy observer status at the moment — a status that Nunavut MLAs want to deny the EU.

All Nunavut MLAs voted on the motion — and 17 in all, except for Amittuq MLA Louis Tapardjuk, who abstained, voted to support the motion.

The EU ban on seal products, which came into effect Aug. 20, 2010, offers an exemption to furs hunted traditionally by Inuit from Canada and Greenland, but bars them from large-scale commerce in skins, oils or meat in its member nations. It’s still not clear how this exemption would work and if any producers in Canada or Greenland will ever use it.

Hudson Bay MLA Alan Rumbolt said that because of the seal products ban, people in Sanikiluaq are having trouble providing for their families, and he commended his colleagues for standing up and supporting the May 9 motion asking for the EU to be denied observer status at the Arctic Council.

This “symbolic move will tell the EU that what they are doing is not right,” said South Baffin MLA Fred Schell.

The EU ban has greatly affected the price of sealskins, he said.

And Tagak Curley, the MLA for Rankin Inlet South also said the ban was detrimental to Inuit.

“The motion is about time,” he said.

Curley said he fully supported the motion, saying that it isn’t personal, but that the EU is “in a bind,” as they are ruled by citizens who are influenced by animal rights groups.

“We have stood by for too long… the world isn’t getting any bigger, it’s getting smaller, communities of Nunavut are impacted by the EU,” he said.

“There is no deal in inviting them to be observers until policies change,” Curley said.

In 2011, Nunavut MLAs passed a motion calling on the GN to order the Nunavut Liquor Commission to impose a moratorium on its purchase of alcohol products from EU member states, to protest the EU’s import ban on seal products.