“We trust that this cooperation will continue” 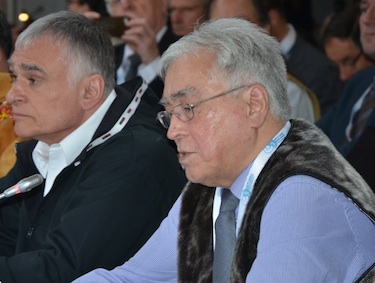 That’s the hope of representatives of the Arctic Council’s indigenous permanent participant groups, who attended the May 15 Arctic Council ministerial in Kiruna, Sweden.

“We appreciate that Canada from the outset has made a point of involving the Saami in their preparations for the chairmanship,” said Aile Javo, president of the Saami Council, said May 15 at the ministerial gathering.

“We trust that this cooperation will continue.”

“With your close relationship to Inuit and the people of the North, we are sure that you will fulfill your country’s aspirations,” Lynge said.

Bill Erasmus, grand chief of the Dene Nation in the Northwest Territories and international vice-chair of the Arctic Athabaskan Council, said, ‘My understanding of the minister’s discussion is that she wanted to look at economies, look at the social factors, look at the health and well-being of people, and we welcome that.”

The issue may be making sure that all indigenous voices are included.

“We all have different views,” he said. “And it’s going to take some time to put that together.”

Among the hopes of Arctic indigenous representatives in Kiruna: “more attention to the Indigenous peoples’ cultural heritage, sacred sites and cultural landscapes.”

Responding to Canada’s interest in boosting economic development in the Arctic region, the president of the Saami Parliament in Norway Egil Olli, said “management of resources must include protection of the basis for indigenous industries, culture and language.”