Researchers to size up Arctic agriculture at Greenland conference 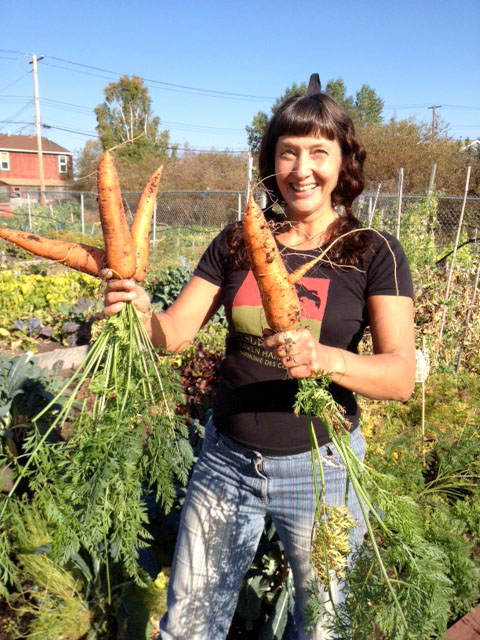 Lone Sorensen teaches gardening and farming in Yellowknife, through her company Northern Roots. Although the Northwest Territories’ growing season is short, it supports small-scale farming, as these massive carrots show. Sorensen recently stopped off in Iqaluit on her way to a conference on Arctic agriculture in Qaqortoq, Greenland. (PHOTO COURTESY OF LONE SORENSEN)

Outdoor gardening and agriculture are rare in Nunavut’s environment, but not so in Greenland, even though the huge island has much in common with its Arctic neighbour.

How is it that food is grown there, yet virtually none on the land in Nunavut?

Northern gardener Lone Sorensen will take part in a two-day conference on Arctic agriculture in Qaqortoq, Greenland this month to find out, and share her 25 years of expertise as a gardener and farmer in Yellowknife.

In Iqaluit for a three-day stopover on her way to Qaqortoq, June 21 to June 24, Sorensen remarked that the Nunavut capital shared a few things in common with its Northwest Territories counterpart.

“You have exactly the same amount of sunlight that we do in Yellowknife,” she said, as well as a dry climate and acidic soils low in nutrients.

This is very unlike Yellowknife’s sub-Arctic conditions, where longer, warmer summers and more abundant fertile soil can support some gardening and small-scale agriculture.

Sorensen lauded the Iqaluit Community Greenhouse, where the greenhouse society grows select vegetables every summer, and she wonders how feasible more large-scale food-growing efforts could be in Iqaluit.

“There’s definitely potential. You have to keep experimenting and trying things out,” she said.

Greenland has hosted farming activities on its Arctic landscapes for hundreds of years, with some interruptions, apparently due to climactic changes.

“I’m wondering what are the similarities between Iqaluit and Greenland,” said Sorensen, who is originally from Denmark, Greenland’s parent country, where she grew up on a farm and studied agriculture.

“Do you have similar challenges? Because I know they do quite a bit more farming in Greenland.”

This includes vegetables, herbs and berries, and sheep-farming. Sorensen said she will tour sheep-farming and potato farms with fellow researchers at the conference, as well an agricultural research station.

Organized by Danish and American academics through a Greenlandic-Danish-U.S. “joint committee,” the conference takes place June 30 and July 1.

Sorensen, the only Canadian speaker to attend, will describe agricultural activities in the Northwest Territories, focusing on projects she worked on as a teacher and promoter of gardening and farming in Yellowknife.

Other speakers will include Arctic agriculture researchers from Alaska, Denmark, Greenland, Norway, and Sweden.

The warming trend has proved particularly fruitful for agriculture in Greenland, where, according to one report from Reuters, farmers and gardeners can reportedly grow crops “unheard of years ago.”

Sorensen’s main concern however is food security and self-sufficiency for people of the North, who are “very vulnerable” when it comes to food sources, she said, being almost completely dependent on the outside world.

Indigenous cultures of the Arctic provided for themselves under their traditional ways of life, but today, like everybody else, rely on largely on food grown in southern Canada and other parts of the world.

Traditional foods still make up part of some indigenous peoples’ diets, such as seal, fish and caribou among Inuit in Nunavut.

Sorensen, in her work with the Dene people of the Northwest Territories, has found there is plenty of interest in building self-sufficiency by supplementing traditional foods from the land with local garden- and farm-grown food.

“If we could learn to be self-reliant and help each other (aboriginal and non-aboriginal), by just simply growing some of that food we have already incorporated into our diet, we would be much stronger,” Sorensen said.

“We would be much healthier, we would have a much stronger economy. We would be less dependent on what’s happening out in the bigger world. We would be less affected by economic crises, oil crises, or shortages even. If we could just really begin to build our own food security from right here in the North.”