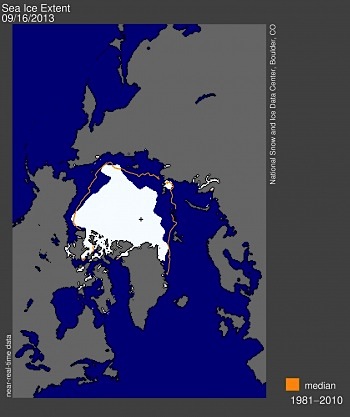 Arctic sea ice extent for September 16, 2013 was 5.10 million square kilometres, The orange line shows the 1981 to 2010 median extent for that month. The black cross indicates the geographic North Pole. (IMAGE COURTESY OF THE NSIDC)

Following a relatively cool summer, sea ice extent fell to a little over five million square kilometres over the first two weeks of September and the ice cover on the Arctic Ocean now stands at its minimum extent for 2013.

“This is substantially more ice than observed on the same date last year, yet sea ice extent remains quite low compared to the long-term 1981 to 2010 average,” said the Colorado-based National Snow and Ice Data Center.

This would rank 2013 as the year with the sixth lowest Arctic ice extent since satellite records began 35 years ago, the NSIDC said Sept. 20.

The Northwest Passage has seen more extensive ice this summer since 2007 and is not open, the NSIDC said in another recent analysis of ice cover at the poles.

Arctic ice loss through the first two weeks of September was faster than average, the NSIDC said.

However, the melt season ended with considerably more ice.

“This is not surprising, as climate models consistently project that there will be large variations in summer ice extent from year to year. A cool summer can help to retain a thin layer of ice, increasing the overall ice extent. Conversely, a warm summer can help to remove much of the thin ice cover,” the NSIDC stated.

As a whole, air temperatures this summer were below average over most of the central Arctic Ocean and Greenland, helping to slow down ice melting, it said.