“One cold winter won’t reverse it” 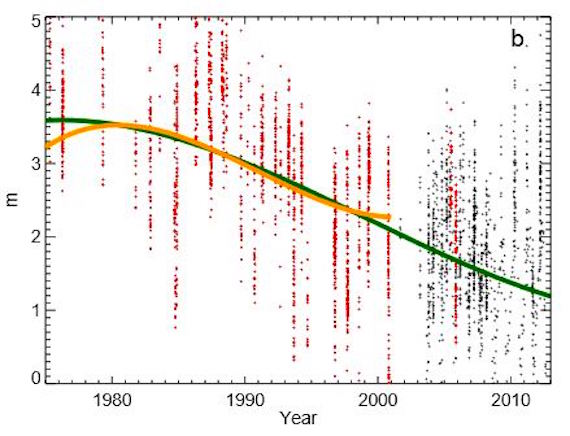 The average annual sea ice thickness, in metres, for the central Arctic Ocean. Red dots are submarine records. The green line is the long-term trend. (GRAPH COURTESY OF R. LINDSAY, UNIVERSITY OF WASHINGTON) Arctic sea in the High Arctic in August: ice thickness has diminished since 1975, a new study from University of Washington researchers says. (PHOTO BY JANE GEORGE)

After a winter of frigid temperatures in the Arctic, you might think that the Arctic Ocean’s sea ice would be stronger and thicker than during previous years.

Sadly, this is not the case: the Arctic sea extent, now nearing its annual maximum, is likely to dip to a record low.

And new research points to an irreversible long time trend in the decline in the thickness of Arctic sea ice.

Arctic sea ice is thinning “dramatically,” according to climatologist Ron Lindsay from the University of Washington, the lead author of a paper called “Arctic sea ice thickness loss determined using subsurface, aircraft, and satellite observations,” published in the most recent edition of the Cryosphere journal.

That’s a 65 per cent reduction, nearly double the 36 per cent decline reported by an earlier study.

The research team’s project on ice thickness only looked at observations up to 2012, when the summer sea ice coverage reached a record low.

The two years since then have seen slightly more sea ice in the Arctic Ocean.

But even several cold years in the Arctic are unlikely to change the downward trend in thickness, Lindsay told Nunatsiaq News.

And these global temperatures are set to rise starting in 2020, another new research study says, with Arctic temperatures expected to rise even more, by 2C over 40 years in an “uprecedented” rate of change.

Lindsay’s research found that September ice thickness, when the ice extent over the Arctic Ocean reaches its minimum, is 85 per cent thinner in the Arctic basin. There ice has gone from 3.01 m in thickness to 0.44 m.

“If the ice is, thin it is easily melted to open water or blown by the winds out of one area and compacted in another,” he said.

“With thinner ice we expect both less ice extent but also more variability from year to year in the extent, so some years may have a recovery of summer ice in some areas while having a big decline in others.”