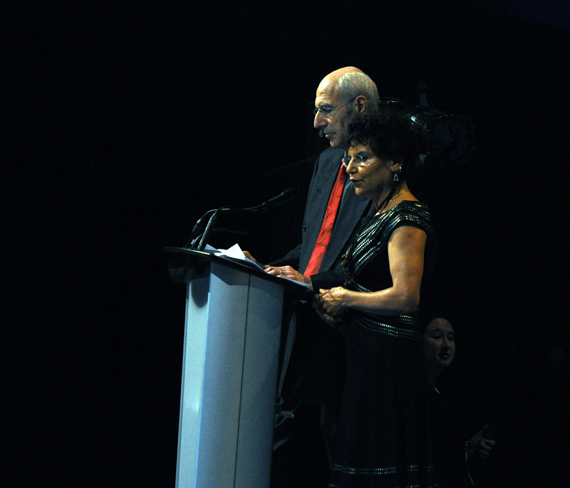 Arnold Witzig and Sima Sharifi speak to the Arctic Inspiration Prize gala Jan. 31, just after it was announced that the couple will donate $60 million to the prize’s trust fund. (PHOTO BY SARAH ROGERS)

OTTAWA—When Arnold Witzig and Sima Sharifi spoke before the Arctic Inspiration Prize gala last week, the couple had the room on its feet.

The Vancouver philanthropists are the driving force behind the multi-million-dollar prize that funds different Arctic initiatives, most of them focused on community research and well-being.

But Sharifi and Witzig have grown with the success of the prize. When it launched in 2012, the pair was relatively unknown; on Jan. 31, the estimated 1,500 northerners attending the Ottawa gala thanked them with teary eyes and thunderous applause.

Not only has the couple financed awards over the last six years, but this year they announced a $60 million donation to the AIP trust. That means Witzig and Sharifi will hand over nearly their entire fortune to secure the prize’s future.

“It was simply the right thing to do, and the right time to do it,” Witzig said.

“To see all those northerners in the room… I knew many of them and I guess many of them know me, and that’s totally different from when I started in 2012. It’s ready to go ahead without us.”

Witzig and Sharifi also announced that night that they were handing over the reins to the AIP’s current executive director, Kevin Kablutsiak, who will manage all aspects of the prize while the couple moves into semi-retirement.

The story of the AIP’s founders begins with Witzig’s upbringing on a small farm in Switzerland.

Witzig went on to become an architect and designed technology for the food processing and printing industries that made him his fortune.

He moved to Canada in 1999, and met Sharifi—herself a refugee from Iran who settled in Canada in the 1980s—while on a trip to Fairbanks, Alaska.

The couple embarked on a number of trips north to explore the Arctic, including a jaunt in Iqaluit to do polar travel training with well-known guide Matty McNair.

Witzig has since skied to the North Pole and to Greenland.

“I know the environment and what it means to survive there,” he said, “and I learned to like it.”

That developed into a better understanding of the history of the North’s people, and the issues that have come as a result of that history, Witzig said.

“It’s still clearly the most underserved part of Canada,” he said. “But [northerners] are really active in solving [these issues] themselves with their own ideas, and that’s what we saw and what we wanted to support.”

Sharifi and Witzig first approached ArcticNet in 2011 to propose funding a prize for Arctic research. Witzig said their goal was always to invest their fortune in the prize, but they wanted to first ensure northerners would take ownership of it.

Four of this year’s eight winners were based in either Nunavut or Nunavik, including Unaaq Men’s association of Inukjuak, which took home $500,000, and the Chesterfield Inlet-based Qajaq Program, which won $140,000.