“One region in danger of being left behind is the Arctic” 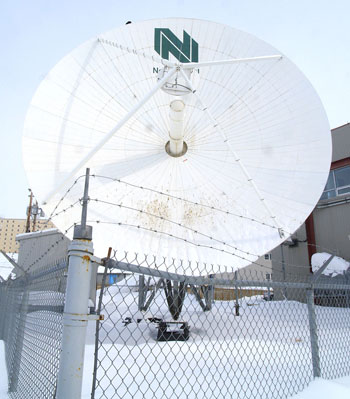 The Arctic Economic Council, an offshoot of the Arctic Council—a political body made up of the eight Arctic Nations including Canada—has issued a report urging governments to work with companies to fill in much needed broadband infrastructure in the North. (FILE PHOTO)

All roads to reliable high-speed Internet in the Arctic run through the private sector, so more must be done to motivate and support companies wanting to develop broadband infrastructure.

That’s according to the Arctic Economic Council, which released a series of recommendations to Arctic nations Jan. 24 in a report called “Arctic Broadband: Recommendations for an Interconnected Arctic,” drafted by its international working group.

“Reliable broadband is necessary to promote and advance interconnectivity, which in turn facilitates improvements in national economies, education, health, and many other sectors of society,” the report said.

“Despite these benefits, broadband deployment and adoption across the globe have not been uniform. One region in danger of being left behind is the Arctic.”

The AEC is calling on governments to create incentives for businesses developing Internet services in the Arctic. These incentives could include tax credits, a more flexible permit system for infrastructure, and international collaboration between governments and businesses to transmit broadband across multiple jurisdictions.

The recommendations, the report notes, are purposefully broad, as Canada, Denmark, Finland, Iceland, Norway, Russia, Sweden and the United States have different objectives for high-speed Internet in one of the most technologically isolated regions on the planet.

Late last year, Canada’s telecommunications watchdog, the CRTC, ruled that the Telecommunications Act benchmark of 5 Mbps download and 1 Mbps upload for minimum levels of service was obsolete and “doesn’t cut it anymore.”

The CRTC is now calling for a new benchmark, 10 times higher than the previous objective: 50 Mbps download and 10 Mbps upload.

For Nunavut, which relies mostly on slow and expensive satellite feeds, those figures are far from reality.

“Individuals living in Nunavut, Canada pay 45 per cent more for broadband than their counterparts in the lower Canadian provinces,” the AEC report said.

One solution, the report says, is for government to “hard wire” broadband policy and regulation into new laws, while also providing specific rules for service rates.

“Furthermore, if public-private partnerships are not practicable, governments should use public resources to finance and operate broadband facilities to offer services on a carrier-neutral and cost-based wholesale basis to help spur adoption,” the report said.

“As part of such efforts, governments and private entities should work collaboratively to examine whether a transition path to privately owned and operated network facilities and services can be found.”

Hand-in-hand with infrastructure development, the AEC wants governments and private businesses to invest in computer and digital literacy, coordinated through schools, community centres and libraries.

“Deployment without adequate adoption rates will be meaningless,” the report said.

Of the 19 members participating in the AEC’s international working group for the report, three are Canadians, including one Nunavummiut, Oana Spinu, who oversees operations at the not-for-profit Nunavut Broadband Development Corp.

The report also mentions two companies with proposed Arctic infrastructure projects that could directly improve Internet quality in the territory.

Ottawa-based Nutivik Communication is proposing a sea-bed fibre-optic cable that would provide southern Internet speeds to Nunavik as well as southeast and southwest Nunavut.

And the Quintillion Project, based in Anchorage, Alaska, which has already laid optic cables reaching isolated parts of northern Alaska, has proposed future objectives to extend that cable east across Canada’s Arctic and onwards to Greenland and Europe.

Tara Sweeney, chair of the AEC, is an employee of Arctic Slope Regional Corp., which owns an interest in the Quintillion Project.

Last July, Sweeney penned an op-ed on the unique challenges facing Arctic Internet infrastructure, which appeared in the Nunatsiaq News.

Following the CRTC’s redefinition of minimum rural Internet speeds, the National Contribution Fund, worth approximately $100 million, will move away from funding landline subsidies and focus on subsidizing broadband.

The AEC, Canada’s creation in 2014 when Leona Aglukkaq, then Nunavut’s MP, chaired the Arctic Council, is intended as a forum for business opportunities, trade, investment and growth in the best interests of northerners.

You can read the AEC’s full broadband report here.