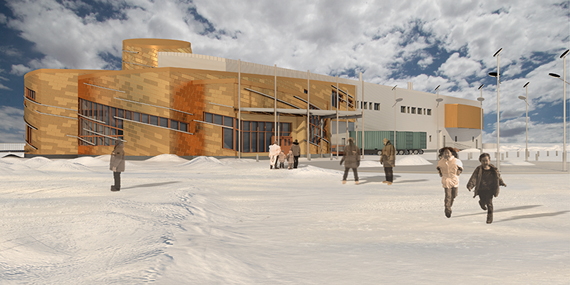 The Canadian Polar Commission, set to merge with the future Canadian High Arctic Research Station in Cambridge Bay (seen here in an artist’s rendition), and the Arctic Society of Finland say they plan to work more closely together. (FILE IMAGE)

Finland and Canada moved toward closer collaboration March 23 with the signing of a declaration of cooperation between the Arctic Society of Finland and the Canadian Polar Commission.

A news release on the declaration says they will agree to:

• cooperate in support of sustainable development of Arctic areas;

• increase awareness of the need for Arctic cooperation in economic, environmental and other appropriate areas for developing northern communities; and,

• work with the governments of Canada and Finland to support such developments.

A joint action plan is expected to follow in April.

This declaration comes as Canada moves closer to handing over the next two-year chairmanship of the Arctic Council to the United States next month in Iqaluit.

Finland will take over the chairmanship of the Arctic Council from 2017 to 2019.

In 2015, the Polar Commission, which has a mandate to promote the development and dissemination of polar knowledge in the Arctic and Antarctic, will merge with the Canadian High Arctic Research Station in Cambridge Bay to form a new national organization which will bring together the commission’s “knowledge functions, an Arctic science and technology program, and a world‐class research station,” the release said.