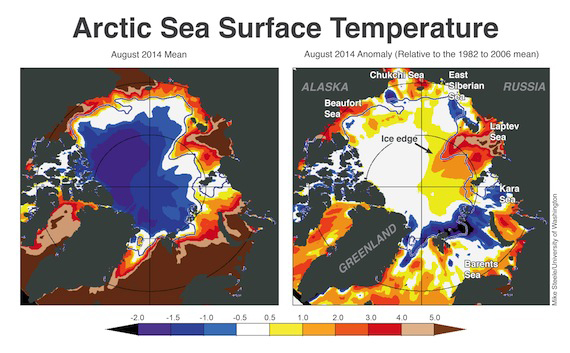 Arctic sea ice extent for September 15, 2014 was 5.07 million square kilometres. The orange line shows the 1981 to 2010 average extent for that day. The black cross indicates the geographic North Pole. (IMAGE COURTESY OF THE NSIDC) 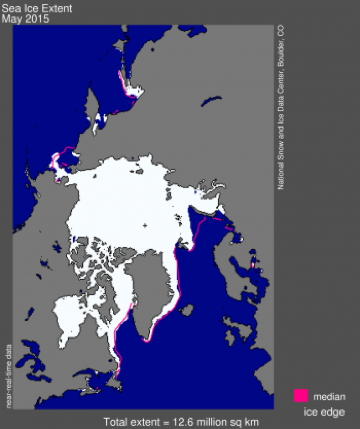 The map at top shows the ages of ice in the Arctic at the beginning of March 2014; the bottom graph shows how the percentage of ice in each age group has changed from 1983 to 2014.(IMAGE COURTESY OF THE NSIDC)

Cambridge Bay residents woke up this morning to see a sheen of ice floating on top of the water in the bay.

That’s no surprise because the end of this year’s Arctic sea ice melt season is “imminent,” according to the National Snow and Ice Date Centre, which bases its analysis on satellite images of Arctic ice cover.

The minimum extent of Arctic sea ice will be slightly lower than last year’s, making it the sixth lowest extent in the satellite record, the NSIDC said Sept. 16.

And Arctic sea ice extent remains low compared to the long-term 1981 to 2010 average, the NSIDC said.

Sea ice extent declined at a rate of 28,700 sq km per day through the first half of September.

Satellite images from 2014 also show a strong northward extension of ice which is less than one year old. That “young” ice melts more quickly, where open water has developed.