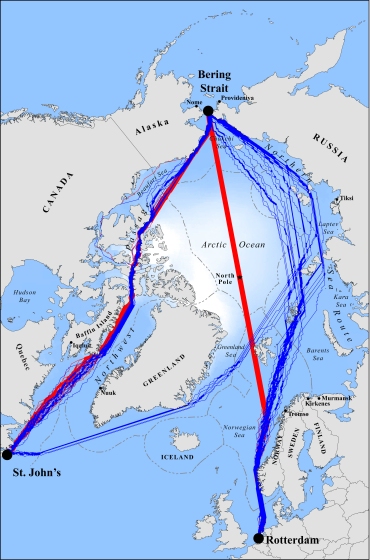 Diminished Arctic sea ice means the Northwest Passage and the central Arctic Ocean will open to more shipping by 2050 — and along with that comes a host of potential problems, suggests a new research study of Arctic shipping from 2040 to 2059.

“The development is both exciting from an economic development point of view and worrisome in terms of safety, both for the Arctic environment and for the ships themselves,” said researcher Laurence C. Smith, a professor of geography at UCLA and co-author of a paper that appears in the March issue of the journal Proceedings of the National Academy of Sciences Plus.

The opening of the Northwest Passage, in particular, could also open “two chronic, long-standing debates over the status of international shipping,” his paper notes.

These are Canada’s sovereignty over the Northwest Passage and the ratification of the United Nations Convention on the Law of the Sea by the United States.

This convention defines the rights and responsibilities of nations in the use of the world’s oceans, establishing guidelines for businesses, the environment, and the management of marine natural resources. To date, 162 countries and the European Union have joined the convention — but not the U.S.

Using climate forecasts for the years 2040 to 2059, it explores accessibility during the Arctic’s most navigable month of the year, September.

The research suggests that, by 2050, changing sea ice conditions will allow common open-water ships to cross the Arctic along the Northern Sea Route over the Russian Federation, new routes for moderately ice-strengthened ships over the North Pole, and new routes through the Northwest Passage for both vessel classes.

As well, the Arctic ice sheet is expected to thin to the point that polar icebreakers will be able to navigate between the Pacific and Atlantic oceans by making “a straight shot over the North Pole.”

“Nobody’s ever talked about shipping over the top of the North Pole,” Smith said in a UCLA news release. “This is an entirely unexpected possibility.”

As for the Northwest Passage, it’s now navigable only one out of seven years, on average, making it too unreliable to be a viable option for commercial shippers, the researchers said.

But, by 2050, sea ice in the Northwest Passage will melt in September to the point that it is accessible every other year on average.

Choosing whether to ship through the Northwest Passage, instead of taking another route, “will become a coin toss,” Smith said

The predictions, however, do not foresee access to the Northwest Passage beyond late summer.

“This will never be a year-round operation,” Smith said.

Although sea ice currently represents “the single greatest obstacle to trans-Arctic shipping,” numerous additional factors, including “lack of services and infrastructure, high insurance and escort fees, unknown competitive response of the Suez and Panama Canals, poor charts, and other socioeconomic considerations,” will continue to “signifcant impediments to maritime activity in the region,” the study said.

The future of the Arctic also concerned Smith in his book, The World in 2050, which looked at what kind of home awaits Arctic people in 2050.

Within 40 years, the High Arctic is likely to resemble Nevada, “a landscape nearly empty but with fast growing towns fueled by a narrow range of industries,” he said.