“The community responded very well with trying to keep everyone safe” 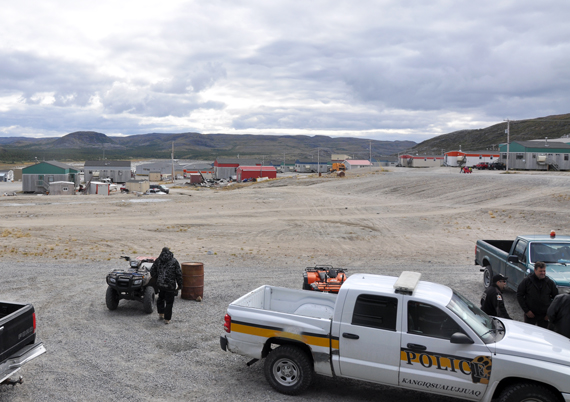 Many public buildings in Kangiqsualujjuaq, pictured here in 2013, closed Sept. 26 as police tracked down an armed man. The suspect turned himself into police Sept. 27. (PHOTO BY SARAH ROGERS)

An active shooter shut down much of the Nunavik community of Kangiqsualujjuaq over a four-day period earlier this week.

Kativik Regional Police Force officers first got a call late Sept. 23 about a man firing his weapon and uttering threats in the Ungava Bay community of 900.

Over the next four days, police said the armed man, who is in his thirties, fled to the tundra while officers tried to track his movement, the KRPF told Nunatsiaq News Sept. 29.

KRPF officers from other Nunavik communities were brought in for reinforcement, police said.

Police did not say if the gunman was targeting anyone in particular. But as a precaution, many of the community’s public buildings were closed Sept. 26, including the school, daycare and stores, while police encouraged residents to stay indoors.

The suspect finally turned himself into the police at the local KRPF station early Sept. 27, police said.

“Everyone is okay,” said Kangiqsualujjuaq mayor Hilda Snowball. “The community responded very well with trying to keep everyone safe.”

“We’re also worried about the [suspect’s] well-being,” she said. “We all have different stories and things happening in our own lives.”

The suspect remains in custody, although police have yet to lay charges against the man. The investigation is ongoing, the KRPF said Sept. 29.