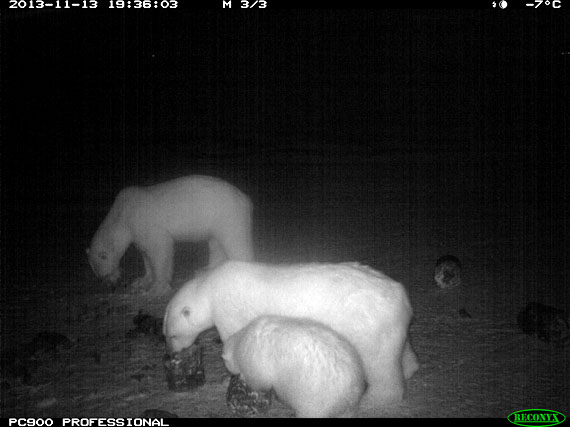 Polar bears just outside Arviat claw at seal meat, bound in cylinders of ice, in this night photo. The Government of Nunavut’s wildlife office laid out the food at two points outside of hamlet limits to “keep polar bears busy” and away from the community as they migrate north, wildlife officer Jonathan Pameolik said. (PHOTO COURTESY OF ARVIAT WILDLIFE OFFICE)

Like many communities in Nunavut’s Kivalliq region, Arviat sees many more polar bears than usual from late-October to the start of December.

But this year’s season is a little busier than normal in some hamlets — and Arviat is seeing the busiest by far.

The community encounters polar bear situations every fall as sea ice on the coastline of Hudson Bay freezes, “and we’re at that stage right now,” said Jonathan Pameolik, conservation officer for the Government of Nunavut’s wildlife office in Arviat.

Since the end of October “we’ve had some pretty intensive bear activity, that’s for sure. There’s a lot of bears,” Pameolik said Nov. 14.

He estimated that his office has been dealing with about seven polar bear alerts in any given 24-hour period this month, which calls for wildlife officers to chase polar bears out of the community with warning shots and bear bangers.

“Usually there’s three to five times we go out during the day, and in the evening another three or four we have to deal with,” he said. “It’s pretty consistent, and it’s peaking right now.”

Despite the ongoing alert, the hamlet hasn’t had to make any kills in defense of life or property so far, “knock on wood,” he said.

“Hopefully we won’t get there, but that’s certainly a possibility.”

The wildlife office is braced for the polar bears’ passage, as they migrate north, with many solutions to keep polar bears out of the community and minimize defense kills, he said.

The newest solution is to keep polar bears out of the hamlet with “diversionary feeding,” which draws bears away by attracting them to food well away from hamlet limits.

“We purchased some seal meat from local residents, and placed them out of Arviat,” said Pameolik.

The meat is contained in drums, cages, or simply frozen in blocks of ice, which keeps polar bears busy as they try to get at their meal.

Wildlife officers have set up two diversionary feeding stations — one more than two miles to the east of the hamlet, and another four miles to the north, he said.

Pameolik’s office has also hired three polar bear monitors to keep watch over the community at all hours.

These measures add to the usual precautions the wildlife office offers every year. Dog team owners have used electric fencing to protect stores of dog food, he said, and the office offers sea cans for meat storage.

“The community is always aware. Every year we encounter so many bears,” he said.

Although he couldn’t say whether this year’s traffic has hit any records, some in the hamlet say they have never experienced so many polar bear alerts.

“I live by the shore and I get woken up by bear bangers almost every other hour, starting 10:00 or 11:00 in the evening up until 6:00 in the morning,” said Leah Muckpah, acting coordinator of the Kivalliq Wildlife Board, who was in Arviat until Nov. 18 to assist the hunters and trappers organization.

“The bear patrol, the department of Environment, the hamlet and the HTO have been working together to minimize defense kills,” she said. “It comes with persistence.”

Elsewhere in the Kivalliq region, Chesterfield Inlet and Repulse Bay have also seen more bear activity than normal for this time of year.

Repulse Bay has experienced one or two alerts of polar bears entering the community per day this month, usually after dark, said May-Lain Bruce of the Arviq Hunters and Trappers Association.

“I’d say that it’s slightly more than usual,” she said.

The hamlet’s senior administrative officer Elizabeth Kusugak agreed, adding that the community has killed two polar bears in defense of the community since the end of October.

“It’s because of the slow freeze-up, that there are more bears,” she commented. The animals usually stay clear of the hamlet, but this year’s sightings have called for more intensive patrols at hamlet limits, she said.

Douglas Aggark, vice chair of the Aqigiq HTO, in Chesterfield Inlet, estimated that his community is experiencing “at least a 15 per cent increase” in polar bear sightings this season over last year’s.

“We know the [polar bear] population seems to be rising,” he said, adding he believes government and scientists’ estimates of a decline are mistaken.

“When I was a young boy, we never worried about any polar bears coming into the community as much as today,” said Aggark, 22. This month the hamlet warned against allowing children to play outside after dark, he added.

Just north of the Kivalliq region, the community of Hall Beach has also experienced a high alert on polar bears. The hamlet reported two defense kills in the community this month, as of Nov. 15.