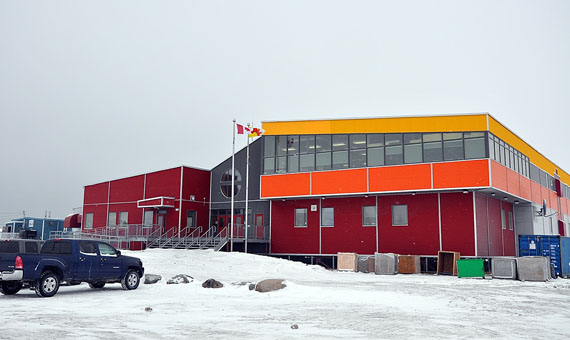 Parents of high school students in Arviat are concerned about changes to curriculum delivery next year that may force certain students to take distance education courses starting in September.

Arviat parents attended an information session June 17 at the local John Arnalukjuak High School, where they were told the school would only teach a small handful of core courses in 2015-16, like English and math.

That means that other academic courses will have to be done through distance education, offered by the Alberta Distance Learning Centre (much of Nunavut’s curriculum is already based on Alberta’s.)

This is what many parents feared when they learned earlier this year that Arviat’s three schools would lose a combined 12.5 teaching positions in 2015-16, due to low enrolment.

Facing the largest cut to teaching allocations in the territory, Arviat’s district education authority said it would have to look at cutting programming in areas like music, shop and drama.

Now certain academic courses, many of them science courses, will be taught through online modules.

But the Government of Nunavut’s education department says distance learning isn’t uncommon across the territory.

“It’s just another resource that we like to have at our disposal,” said John McDonald, assistant deputy minister of education.

“Sometimes it’s hard to be able to offer Grade 11 or 12 biology or chemistry to two students. So when it’s not available, we offer distance education instead,” he said. “There’s a while suite of courses offered through the ADLC.”

There is still some planning to do over the summer, as Arviat’s school administrators finalize course plans and teaching staff for the beginning of the school year.

In-class course availability has a lot to do with what teachers are qualified to teach, McDonald added, but said the changes at John Arnalukjuak don’t necessarily have to do with the cuts to teaching allocations.

“A lot of people want to make that connection, but there are variables,” he said. “You might not get a teacher with a particular background.”

Secondary students with course requirements that aren’t offered locally can still register for those classes through John Arnalukjuak. They’ll be provided a classroom space and staff support to follow the course through distance education, MacDonald said.

But parents are concerned that offering less programming will hurt Arviat student attendance even more. The loss of 12.5 teachers represents a cut of about $206,000 to Arviat’s local education budget, the DEA has said.

Across the territory, Nunavut schools stand to gain 11.5 teaching positions, plus the addition of 43 new learning coaches, and six new employees at the territory’s three regional school board operations.