Arviat tries to scare off its unwanted polar bear visitors 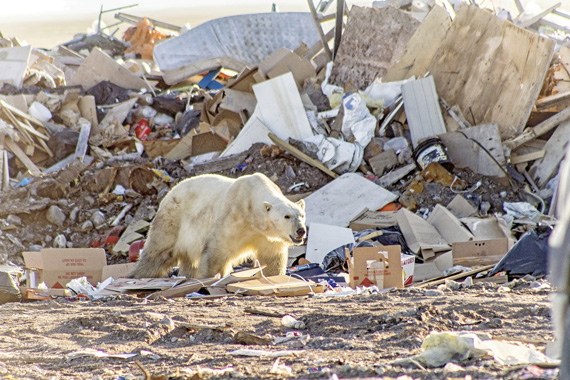 A polar bear looks for something to eat at Arviat’s dump July 13. (PHOTO BY PAUL ANINGAT)

It was another loud evening in Arviat July 16, as bear bangers went off to scare away a nuisance polar bear that had ventured into the Kivalliq community.

Arviat has received a number of visits from polar bears this week, prompting the hamlet to issue a warning, as polar bears have been spotted scouting the local landfill for scraps, wandering into the community and even chasing a group of boys one evening, as residents reported.

Jonathan Pameolik’s job is to set off the polar bear bangers: the local wildlife officer has had four calls this week alone.

“One of them was swimming towards the community, another one was at the dump,” he said. “Once we get close enough, we can use the bear bangers to scare them off.”

The goal is to scare the polar bears far enough south so that they’ll decide to carry on their journey to the southwest coast of Hudson Bay, where they wait for freeze-up.

But it’s not always that easy. By the time Pameolik responded to two calls this week, polar bears had already left the area, likely to return.

That’s not much different than during the fall months, when Arviat sees a steady stream of polar bears passing by and through the community on their migration north.

What is different is to see so many polar bears passing through the community during the summer months, said Pameolik, who’s worked as a wildlife officer in Arviat for 15 years.

“In past years, we’ve seen bears occasionally in the summertime in Arviat along the shoreline, but it’s certainly unusual to be dealing with them this early,” he said. “But we can’t really say why that is.”

Although the polar bears have not caused any injuries or major damage so far this summer, they’ve killed sled dogs and damaged property in the past.

This past spring, Arviat South MLA Joe Savikataaq called on the Government of Nunavut to increase the total allowable harvest for polar bears along the west coast of Hudson Bay, where he said bear populations have hit dangerously high levels.

The total allowable harvest of polar bears in the Western Hudson Bay sub-population, which covers the southern Kivalliq region, is 24 bears. Over the past three years, Arviat has been given eight tags.

And in recent years, some of those tags have gone to defence of life and property kills.

“Arviat has learned to live with an abundance of polar bears,” Savikataaq told the legislative assembly last March. “Every fall, they damage property, they kill dogs, and some folks are scared to go out at night, especially elders.”

A 2012 GN survey found the Western Hudson Bay polar bear population to be “viable” at more than 1,000 animals.

For now, the hamlet of Arviat has asked residents to be alert and ensure they know where their children are playing, to ensure their safety.

If residents spot any polar bears in or around the community, they can reach wildlife officers after hours at 857-6944.