Second round of consultations with aboriginal groups still lies ahead 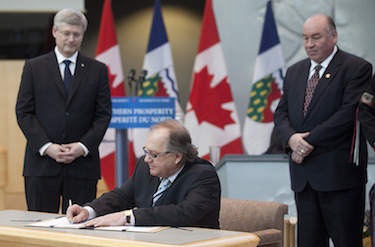 The Northwest Territories moved a big step closer to devolution agreement with the Government of Canada March 11 in Yellowknife, when Prime Minister Stephen Harper arrived to mark the conclusion of negotiations between Canada and the NWT.

Harper declared negotiators had reached consensus on the terms for the devolution of land and resource management from the federal government to the Government of the Northwest Territories.

Harper was accompanied by Bernard Valcourt, the new minister of Aboriginal Affairs and Northern Development, and Nunavut MP Leona Aglukkaq, who is also minister responsible for the Canadian Northern Economic Development Agency and for the Arctic Council.

And Harper signed a ceremonial agreement with Bob McLeod, the NWT premier, in the territorial legislature.

“Our government recognizes that northerners are best placed to make the important decisions about how to run their economies and how to maximize use of their resources,” Harper said in a news release.

“Once finalized, this historic agreement will provide the NWT with greater decision-making powers over a range of new responsibilities which will lead to jobs, growth and long-term prosperity across the territory.”

The goal: to signoff on the final devolution agreement in 2014, after a second round of consultations with aboriginal people.

Devolution in the NWT would mean the transfer of decision-making and administration for land and resource management from the Government of Canada to GNWT.

The territorial government would also become responsible for the management of lands and the issuance of rights and interests for minerals and oil and gas.

It would also give the GNWT the power to collect and share in resource revenues generated in the territory.

“This is a big day for the Northwest Territories. It is a day of hopes, a day of dreams and a day of transformation,” McLeod said.

“Today we mark yet another evolution of our great territory, one that will help unlock our tremendous potential and bring prosperity to our territory and the nation.”

The March 11 event follows an initial agreement-in-principle reached between the parties to the NWT devolution process in January 2011.

Premier Eva Aariak issued a statement saying she congratulates the people of the NWT on concluding devolution negotiations.

“The lands, waters and resources of the northern territories rightfully belong to the people of the North to manage, develop and protect, just like Canadians living in the southern provinces,” she said.

“We hope that the successful completion of devolution talks in the NWT will help us advance quickly towards a devolution agreement for Nunavummiut.”

Last May, Harper named a veteran backroom political official from Yukon to lead negotiations on the transfer of control over public lands and resources from Ottawa to the Nunavut government.

Ottawa completed a devolution deal with Yukon in 2003.

Inuit Tapiriit Kanatami also applauded “the progressive transfer of powers that bring authority closer to the people and works towards eventual self-reliance.”

“Giving resource and land development and royalties directly to local governments is another historic step for Inuit and our relationship with the Crown,” sad ITK president Terry Audla in a March 11 statement. “I’m also pleased that this agreement was signed by the Inuvialuit Regional Corporation.”