Ungava candidates line up as Quebec heads towards election

Plan Nord a unifying project whose benefits accrue to all of Quebec, Liberal candidate says 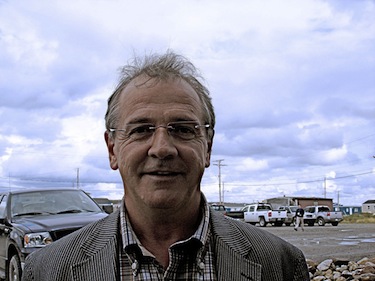 The incumbent MNA for Ungava, Luc Ferland, will face at least three other candidates in a Quebec election that’s widely expected to be held Sept. 4. (FILE PHOTO) 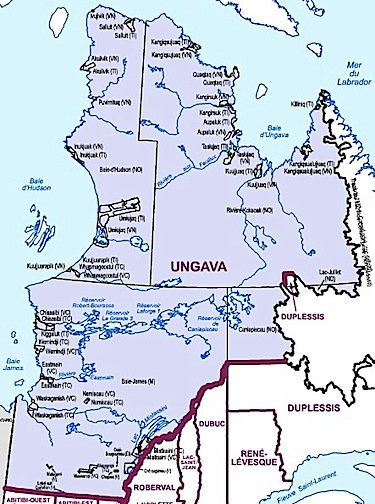 Nunavik, because its population is too small, doesn’t have its own national assembly riding in Quebec. Nunavik remains part of the sprawling Ungava riding. (IMAGE COURTESY OF DIR. GEN. OF QUEBEC ELECTIONS)

With Quebec premier Jean Charest less than two days away from a widely-expected August 1 call for a Sept. 4 provincial election, Quebec’s political parties have lined up to contest the Parti Québécois hold on the northern riding that includes Nunavik.

The PQ’s Luc Ferland is latest in a long line of PQ politicians who have held the seat since 1981, and, in the last provincial election in 2008, Ferland took 47.3 per cent of the vote to regain the riding.

Ungava, Quebec’s largest riding when measured by area, stretches from Ivujivik in the north to Lebel-sur-Quévillon and Chibougamau in the south, with many Inuit, Cree and francophone communities lying in between.

But the thinly populated riding contains only about 24,500 voters.

And Charest, who has said he plans to call the election “soon,” wants to nab the majority of voters there with his “Team Plan Nord” candidates for Quebec’s northern ridings.

On July 28 Charest announced that Gérald Lemoyne, the president of the regional council of James Bay and mayor of Lebel-sur-Quévillon and James Bay, will represent the Quebec Liberal Party [Parti Libéral du Québec] in Ungava.

“Gérald Lemoyne is a man working and dedicated to his region. I am very happy to have him on our team for the next election. He has always been actively involved in his community to improve the quality of life for locals. By trusting Gérald Lemoyne, Ungava citizens can count on one member who will listen to their concerns and will develop the economy of the region,” Charest said in a July 28 statement.

“I love my area and people who live there. I have always fought for the interests of our people. For me, the PLQ is synonymous with progress and prosperity. Plan Nord is a unifying project whose benefits accrue to all of Quebec society. The PLQ is the only team that offers a vision for all Quebecers,” Lemoyne said.

A medical humanitarian, Sylvain Couture, will suit up in Ungava for Québec Solidaire, a nationalist party formed from a coalition of left-wing splinter parties.

Named “Person of the Year” by La Presse and Radio-Canada in 2010, Dr. Couture was medical co-ordinator of the field hospital of the Red Cross in Haiti following the earthquake that devastated the country two years ago.

“I am happy to associate myself with a party with my values and my vision of what should be in Quebec. Bearer of a social and serious commitment, the QS is composed of people who are not afraid of anything and who can hold high their beliefs, it is a pride to join their team. As a physician, it is also important for me to join the only team that defends the system without compromising public health and has bold ideas to improve operations,” Couture said July 19.

Robichaud runs a business start-up firm in the Montreal south shore suburb of La Prairie, and has worked as an auditor in such northern Quebec communities as Kuujjuaraapik, Puvirnituq, Umiujaq, Mistissini and Chibougamau.

Saying he’s an “experienced manager” and “excellent analyst,” Robichaud said he would put up a “good fight” in the upcoming election.

“The future depends on acquisition of expertise. We must act in order to maximize productivity to create wealth to benefit all. Every minute counts and every move must have excellence as its target,” Robichaud said.

Describing himself as “perfectly bilingual,” Robichaud said that “all Ungava electors deserve to have equal access to their representatives” and may use French or English to communicate with him, suggesting Ungava electors could contact him at his email address: ungava2012@hotmail.com.

Other candidates may come forward after the election call.

Since 1983, Nunavik’s Inuit have unsuccessfully called on four separate commissions, federal and provincial, to give the region its own riding.

In December 2007, at the signing of the agreement-in-principle on self-government in Quebec City, Charest vowed he would create “a northern riding” for Nunavik, which would “consecrate the link between Inuit people and all of Quebec.”

But that hasn’t happened yet.

Different commission reports have suggested various re-groupings for northern Quebec, although minimum population requirements mean any new riding would have to hold a population greater than tiny Nunavik’s 11,000 inhabitants.