Asbestos still an issue at Nunavut gold mine: Agnico-Eagle

Second-most hazardous form of asbestos found at Meadowbank mine 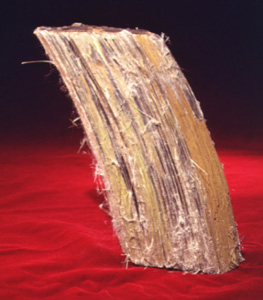 Amosite asbestos is considered to be one of the more hazardous forms of the material. (PHOTO FROM THE MESOTHELIOMA AND ASBESTOS AWARENESS CENTER)

More than a year after Agnico-Eagle Mines Ltd. first detected naturally-occurring asbestos found at its Meadowbank gold mine near Baker Lake, the company continues to deal with asbestos at the mine site.

The problem is that asbestos is also linked to a variety of lung ailments and cancers, mainly affecting those who have worked or used asbestos in their everyday jobs for many years, according to the Mesothelioma and Asbestos Awareness Center.

After finding asbestos in samples taken from the mill’s crusher plant, “we took this issue very seriously and immediately notified regulators,” Norm Ladouceur, the mine’s health and safety superintendent, said at the recent Nunavut Mining Symposium in Iqaluit.

But Agnico Eagle was first “caught off guard” when the asbestos was found, he said.

Since asbestos was discovered at the Meadowbank mine, 1,400 dust samples have been taken.

The type of asbestos found is called amosite, the second-most hazardous form of asbestos, the Mesothelioma and Asbestos Awareness Center says.

However, not all samples at the mine show traces of asbestos, Ladouceur said.

Drillers and truck drivers at Meadowbank appear to be more at risk to asbestos exposure than anyone else, he said.

Now, “dust swipes” are taken from their equipment several times a day.

All 1,000 or so workers on site also wear disposable coveralls and slippers over their boots to prevent the spread of any asbestos dust to non-affected areas.

Workers in the mill and crusher plant also take off their protective gear before they leave those areas and use specialized “hepa” vacuums to clean their work clothes.

That’s because mill remains the place where most of the asbestos has been found.

“It’s a constant barrage of dust,” Ladouceur said about the atmosphere there.

A full-time industrial hygienist now works at the mine site, and engineering controls have been put in place in the crusher plant to improve airborne dust levels, he said.

While dust contamination remains an issue, trying to tell when dust contains asbestos can be a difficult task because “it’s very sporadic — it’s not like we can really pinpoint where it’s coming from,” Ladouceur said.

The management plan for asbestos at Meadowbank also includes a medical surveillance program for workers involved in jobs which may bring them into contact with asbestos.

That includes medical examinations such as pulmonary function testing and respirator fit testing.

Any asbestos that’s found is “disposed in a proper environmentally-friendly way,” he said.

Asbestos has been linked to:

• asbestosis, where the asbestos fibres scar and damage the lungs;

• lung cancer related to the degree of asbestosis in the lungs;

• mesothelioma, a cancer of the lung’s lining, and,

• cancer of the gastrointestinal tract and larynx.

For more news from the Nunavut Mining Symposium, read the special section in the April 19 print edition of Nunatsiaq News.