Second greenhouse slated to open in 2014 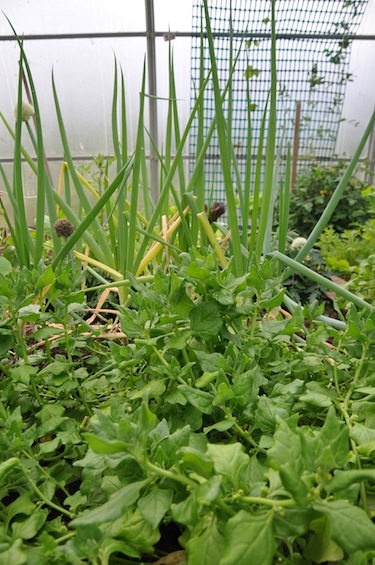 Kuujjuaq’s greenhouse crops are still very much in bloom — the smell of spicy lettuces and fragrant flowers hits you when you walk inside. (PHOTO BY SARAH ROGERS) 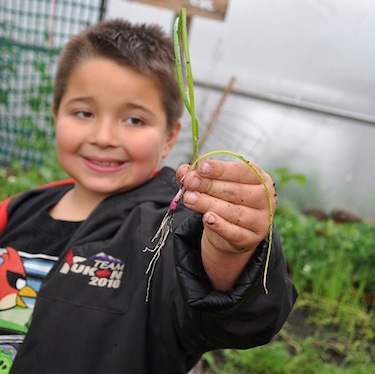 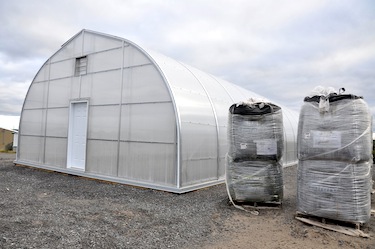 A second greenhouse has recently been constructed next to the original. Those bags of soil to its right will fill garden plots in time for the 2014 season. (PHOTO BY SARAH ROGERS)

KUUJJUAQ — It’s that time of year in Kuujjuaq when winter creeps quietly back across the land, turning the tundra crimson as temperatures dip below freezing.

That’s in all but one fertile spot, tucked away from the town’s main core, where tiny carrots and green tomatoes will still have time to ripen, away from the wind and frost.

Jennifer Matchett-Tasse and her two boys Jeremy, seven, and Scott, two, come to the community’s greenhouse every few days to water their garden plot and pick whatever is ready to eat.

Jeremy is not afraid to stick his hands in the dirt, coming up with tiny carrots, crunchy snow peas and a leaf of fresh spinach to taste.

Not much of the produce makes it home, Matchett-Tasse admits, as the boys snack on their newly-harvested treats.

“These little boys are the biggest reason for gardening here,” she said. “We just eat it as it is.”

“And the cost of food in the North isn’t cheap – so every little bit helps.”

Kuujjuaq’s greenhouse has bloomed in more ways than one over the past five years, from the time a Laval university graduate student started looking at ways to grow fresh produce locally.

The project is based in a greenhouse that Laval University built in the 1990s to grow grass and seedlings.

Today, the greenhouse is managed by the municipality as well as by a group of volunteers.

Its 20-some plots are lush and full of plant life, while another greenhouse stands next door, waiting to open in 2014.

The second greenhouse will help respond to a growing interest by local gardeners and community groups, Matchett-Tasse said

“It’s open for anyone; it’s non-racial, non-denominational, and it’s our job to make sure it stays that way,” she said. “Hopefully, more and more people will be coming.”

This is Marc-André Lamontagne’s third year gardening in the greenhouse, applying the expertise he learned working in greenhouses in the South.

In a territory where gardens are few and far between, Lamontagne guesses that about one-third of his fellow gardeners are Inuit.

“But that will change with the new greenhouse opening — in the long run, Inuit will be using these plots,” he said.

“Over history, people were nomadic and became sedentary because of agriculture, although the Inuit didn’t,” Lamontagne said. “It’s really interesting to bring this culture north.”

And for a garden along the 55th parallel, Kuujjuaq’s greenhouse helps extend the growing season well past the summer months, even though it’s not heated.

“It depends on the year, but I was still picking into the third week of October [last year],” Matchett-Tasse said. “It varies on the crop.”

Over the winter months, municipal staff and greenhouse volunteers will come together to form a committee to oversee greenhouse operations, and determine how garden plots will be allocated in the 2014 season.

While garden plots were handed out by a municipally-run lottery system in 2013, Lamontagne believes the greenhouse project may look to a collective garden model next year.