Two Lovers and a Bear is “a huge undertaking of collaboration” 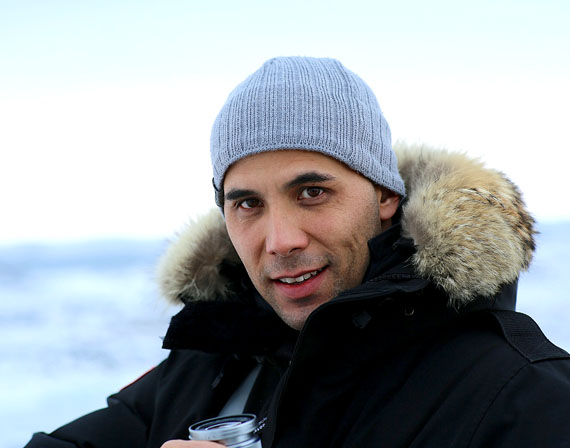 Montreal-based director Kim Nguyen, pictured here in Iqaluit, will select more than 50 Nunavummiut for small roles in his next feature film, Two Lovers and a Bear. Nguyen will shoot scenes in Iqaluit and Apex in April with a cast and crew of more than 100. (PHOTO COURTESY OF MAX FILMS)

Iqaluit will become the setting of an $8.7 million movie production, and producers are looking for local actors — aspiring and experienced — to be a part of it.

The Canadian production Two Lovers and a Bear will feature Tatiana Maslany, 29, star of the Canadian science fiction series Orphan Black, and American actor Dane DeHaan, also 29, who has starred in a string of successful U.S. feature films over the last five years.

Academy award-nominated director Kim Nguyen, of Montreal, will head up the production in Iqaluit for two weeks at the beginning of April, when the two lead actors arrive with a crew from Montreal.

“It’s a huge undertaking,” said Ellen Hamilton, whose Iqaluit-based company North Creative is co-producing the film under the direction of Montreal-based Max Films.

North Creative is hosting the casting call for up to 50 extras, Feb. 14, to appear in the film in non-speaking roles.

Nguyen and a team from Montreal are looking for Inuit men and women of all ages to appear in different scenes of the film, as well as 20 teenagers of all ages and ethnic backgrounds.

“The director really wants to show what it’s going to be like in 10 years in Iqaluit, or up in the North,” said Roselynn Akulukjuk of Iqaluit. As third assistant director on the project, she will co-ordinate and supervise all extras.

“Like it’s not only Inuit living up here, there’s different people living up here from all over the world as well,” she said. “So we want to show that in the film.”

One scene in the movie calls for teen-aged soccer players of Caucasian (white), Inuit, Ethiopian and East Indian background, she said.

Nguyen will select the extras. The director will also cast eight experienced Iqalungmiut actors for speaking roles on Feb. 13, Akulukjuk said, part of a separate arrangement.

All shooting in Iqaluit and Apex will take place in 12 days, starting in the first week of April. Nguyen’s crew will also shoot scenes in Timmins, Ont.

As the title suggests, the movie is a love story. Maslany and DeHaan play the role of “two sort of fragile people, who are struggling, and sort of fighting their inner demons,” Hamilton said.

“The thing that really brings it a fresh perspective, is that it’s set in the North.”

Iqaluit will double for a large unnamed Arctic community, and Apex for a small hamlet. Maslany plays the role of a young Inuk woman, and DeHaan a non-Inuk, who has a rare gift: an ability to speak to polar bears.

Although the movie is a serious drama, “there is a lot of stuff that does not happen in the real world. I can’t quote, but there is some crazy stuff that goes down,” Hamilton laughed.

Producer Roger Frappier, who headed up production of award-winning films such as The Grand Seduction and Decline of the American Empire, is leading the project.

“He’s considered one of the top producers in Canada,” Hamilton said. “He’s well known for making films that have commercial success, which is a rarity, as you can imagine, in Canada.”

Frappier and Nguyen are also including Iqalungmiut crew members to help with technical aspects of the production while in Iqaluit.

“Their goal, which I was very excited to hear about, both said ‘we want to include as many Nunavummiut as possible in our crew, and our cast,’ but they didn’t have any feet on the ground,” she said, and that’s where Hamilton’s work as a co-producer begins.

“The crew will be about 100 people, and it’s a huge undertaking of collaboration. And to know at the end of the day, you’re doing that around a story idea based in fantasy, is pretty exciting,” she said. “It’s not your ordinary day, when you’re working on a film set.”

“They need people of every culture,” said Hamilton. “So if anybody’s thinking it’s something they might be interested in doing, the should come.”