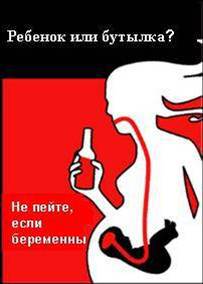 The GN’s new ad design was heavily influenced by an FASD prevention ad developed in Russia, which asks the same question: Baby or the Bottle? (IMAGE COURTESY OF NETFAS.NET) 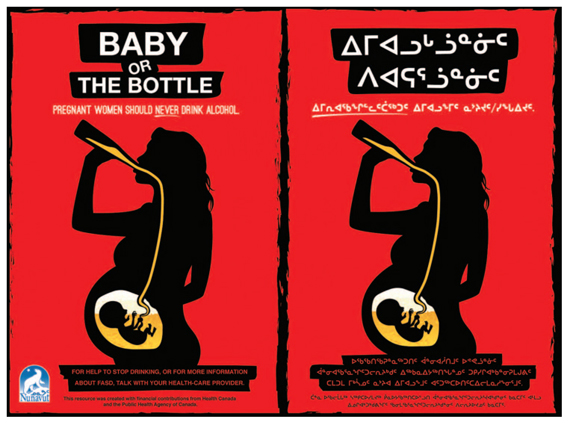 The GN’s new FASD prevention campaign ad aims to send a clear and direct message to pregnant women in the territory, but some Nunavummiut say it offers little support to young mothers. (IMAGE COURTESY OF THE GN)

The Government of Nunavut’s health department says a new eye-catching campaign aimed at preventing fetal alcohol spectrum disorder, or FASD, is helping to spur discussion about alcohol use and pregnancy in the territory.

A new advertisement that the GN put out this month to coincide with FASD prevention day Sept. 9 features the stark black silhouette of a young pregnant woman drinking a bottle of alcohol, against a deep red background.

In the illustration, the yellow liquid flows from the bottle into the woman’s mouth, through her body and into her womb, which carries her unborn child.

The key message of new campaign, designed by Iqaluit-based Atiigo Media, is “Baby or The Bottle.” Text placed above the image reads: “Pregnant women should never drink alcohol.”

“We wanted to have a very solid, hard-hitting image and a message that was very clear,” said Janelle Budgell, acting executive director of population health at the GN’s department of health.

“And that’s that pregnant women should never drink alcohol.”

Canada does not gather national statistics on FASD, although it’s estimated to affect about one per cent of the country’s population.

In Nunavut, alcohol is considered a major risk factor for maternal and child health, but no one has ever collected reliable data on its prevalence in the territory.

FASD describes a range of disabilities that result from exposing an unborn child to alcohol during pregnancy.

Prenatal exposure to alcohol can cause a range of effects from physical, brain and central nervous system disabilities to behavioural and emotional issues.

And the GN wanted to make those risks clear, Budgell said.

While Nunavut collaborated on its last FASD prevention campaign with Yukon and the Northwest Territories, this time staff decided they wanted to focus on a local demographic.

To come up with the message, Budgell said her department put together a working group earlier this year. Members looked at a review prepared by the Public Health Agency of Canada that analysed FASD prevention campaigns from across the country to find out which were the most effective.

The ones with the greatest impact used short, direct messages, Budgell said, and targeted a specific demographic.

“In Nunavut, we have a younger population [so] we were trying to target younger women, but recognizing that it takes a community to raise a child,” Budgell said.

“It’s mostly to start a conversation and a dialogue. Have you seen? Have you heard? To think about the impact alcohol has on an unborn fetus. Based on the feedback we’ve received to date, I think we’ve achieved that.”

But some Nunavummiut feel the ad goes too far by placing the blame on young mothers, rather than offering them the support they need to maintain a healthy pregnancy.

#SupportNotStigma Non-judgemental services are beneficial to mum and baby. Shaming helps no one in the equation. pic.twitter.com/xc0fdLhlPR

@atiigomedia my thought: I would want a campaign that is supportive and offers resources. Not just "talk to your healthcare professional".

Other comments on social media describe the ad as frightening.

The bottom of the ad, which is published in both English and Inuktitut, refers people who want help for alcohol abuse or other problems to their health care provider.

Budgell said the ad offers only general information, because health care and support services vary from community to community.

Outside of territorial media and public buildings, Nunavummiut will also see the ads when they open up orders from the Nunavut Liquor Commission.