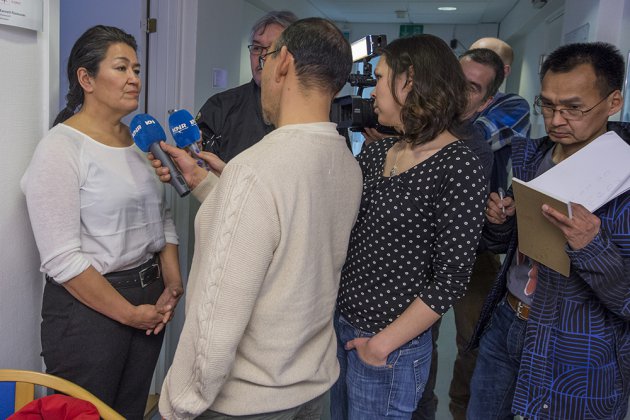 If there was a honeymoon period for Greenland’s new premier Aleqa Hammond, elected March 12, it’s over.

The backlash against Hammond’s decision to boycott the May 15 Arctic Council ministerial in Kiruna, Sweden continues.

Since May 14 more than 30 online stories in Greenland’s leading newspaper Sermitsiaq AG have dealt with her decision to boycott the ministerial and the reaction — and most of that appears to be critical.

The rival party Inuit Ataqatigiit, whose chairperson Kuupik Kleist lost his position as premier in the March election, continues to slam Hammond for her absence in Kiruna.

Aleqa Hammond decided to boycott the May15 Arctic Council gathering in Kiruna because she said Greenland should have a voting seat at the council, instead of sitting, in a non-voting capacity, behind the Danish foreign minister.

“We do not believe that Aleqa Hammond’s decision was judicious or wise,” said Maliina Abelsen and Sara Olsvig from the IA government caucus, in a recent statement.

They said they doubt her boycott will lead to any reaction from the other Arctic Council states because it’s basically looked at as a domestic matter.

And they don’t think that the solution to improving Greenland’s status in Arctic Council is to put its role within the council into limbo.

“Let’s find a mechanism where we ensure that the voice of Denmark, Faroe Islands and the Greenland voice is clear, even at the official level,” Abelsen and Olsvig said. “We should then be able to figure out how to work together without boycotting major political meetings.”

The IA party has also blasted Hammond’s decision to hire an outside media coordinator — particularly without first going to tender to fill the position.

“There is already a staff group that is responsible for servicing the press and ensure that policy is communicated to the public. So hiring an individual to do exactly the same, we believe that incurs an unnecessary expense at a time when overall restraint in public spending is needed,” wrote members of the IA caucus.

Meanwhile, Hammond continues to defend her decision to boycott the May 15 ministerial, and in a story published in Sermitsiaq May 23 she said she was surprised by the reaction to the boycott.

The leaders of the two parties in her coalition government, the Partii Inuit and Atassut, also told Sermitsiaq May 23 that they supported the boycott of the ministerial meeting i”n full, and we were informed of the decision.”

In a recent statement she also mentioned that her decision had received support from Denmark’s foreign minister and the premier of the Faroe Islands.

She said they hoped that, working with Canada, they can find “a satisfactory solution to the problem.”

However, “domestic issue,” is how Leona Aglukkaq, Canada’s minister responsible for the Arctic Council, described Hammond’s decision to boycott the May 15 Arctic Council ministerial.

Aglukkaq said that Greenland contributes in valuable ways to the Arctic Council — “and I would encourage the premier and the foreign affairs minister of Greenland to resolve this domestic issue.”