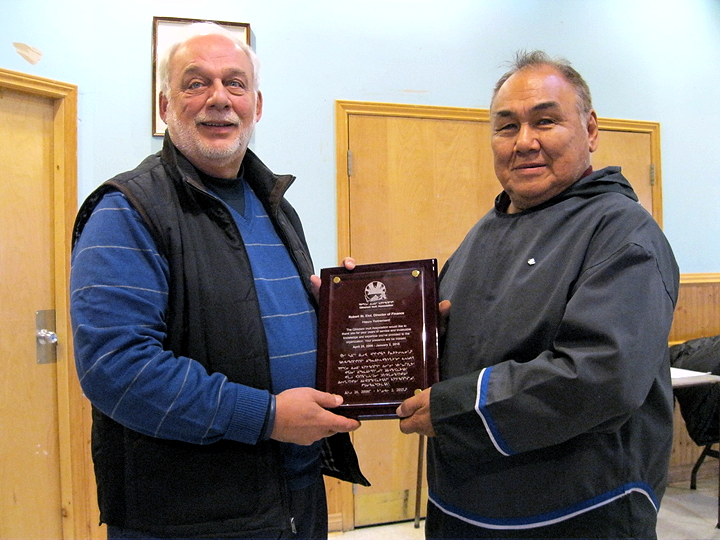 Larry Audlaluk, interim president of the Qikiqtani Inuit Association, presents director of finance Bob St. Eloi with a plaque of thanks for his 10 years of service at the QIA’s annual general meeting in Iqaluit, Oct. 7. (PHOTO BY PETER VARGA)

Thanks to an infusion of cash from the Mary River Inuit Impact and Benefits Agreement, the Qikiqtani Inuit Association is in the money this year.

According to a draft of financial statements presented Oct. 7 at the QIA annual general meeting in Iqaluit, Baffin’s Inuit land claim organization reports an $18.7 million surplus for fiscal 2013-14.

According to the financial statements, covering the fiscal year that ended March 31, 2014, QIA reports $20 million in revenues for its Mary River IIBA Fund and also $2.57 million in unspecified land leases and royalties.

Those land lease and royalty revenues nearly quadrupled from the previous fiscal year.

However, QIA got less money from Heritage Canada and Aboriginal Affairs and Northern Development this year: $87,592 and $571,406 respectively.

Significant changes to expenses over last year include $101,218 that QIA spent on advertising and promotion in fiscal 2014 — more than five times what it spent in fiscal 2013.

The Inuit organization also spent more on professional fees in the most recent year: $2.68 million as compared to $1.4 million for 2012-13.

In terms of investments, QIA’s investment in the Qikiqtaaluk Corp. amounts to $4.6 million. QIA also owns 53.6 per cent worth of Class B non-voting shares in Nunasi Corp., an investment which, according to the financial statements, is equivalent to about $2.5 million.