Scaled back scheme would focus on Milne Inlet, construction for larger project 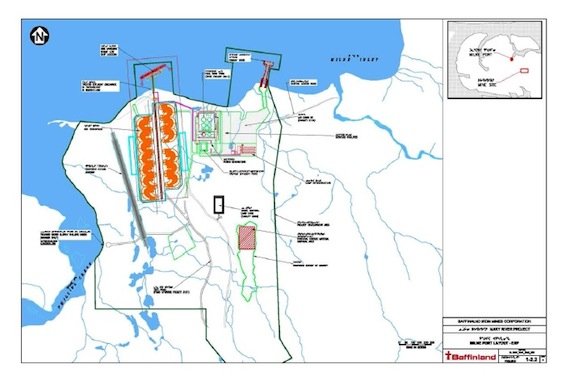 This map from the project description of the “early revenue” phase for the Mary River iron mine in north Baffin shows the infrastructure in store for Milne Inlet.

The plan from Baffinland Iron Mines Corp. for a scaled-down Mary River iron mine project became that much clearer June 12 with the delivery to the Nunavut Impact Review Board of the company’s project proposal for an “early revenue” mine project.

Although smaller in scale than the initial scheme, which Baffinland decided to put on ice late last year, a considerable amount of activity will take place on site during that “early revenue” project.

Judging from information and diagrams in the project proposal given to the NIRB, the five-year “early revenue” project will see a slower construction period for the larger project, as the company waits for a turn-around in global iron prices.

In his June 12 letter to the NIRB, Baffinland’s Erik Madsen, vice-president for sustainable development, said the company could not “predict with certainty” how long it would stay in a holding pattern.

“However, it remains the goal of the company to pursue the full scope of the approved project, once the global economy has improved,” Madsen said.

The “early revenue” project still shows that construction of the larger approved project will be completed in five years — by early 2019 — and by 2020 20 million tonnes of ore would start flowing from Mary River,

The development of Milne Port, freight dock, laydown areas, expanded camp and sewage treatment facilities, maintenance shops and warehouses, and the upgrade of the tote road were also covered by the larger project certificate, approved in December 2012.

But there are new elements, which Baffinland says it wants to complete by early in 2015, if the amendment to that project certificate goes ahead.

• loading in ore and shipping out ore at Milne Port, where Baffinland wants to export ore from July 15 to Oct. 15 using chartered vessels.

The shipping route to Milne Port from the North Atlantic Ocean is well established through very deep waters, the project description says.

It extends from Baffin Bay and passes through Eclipse Sound to the head of Milne Port — the same shipping route assessed and approved in the larger project, the description notes.

In February, the NIRB said a reconsideration of Baffinland’s project certificate for the Mary River iron ore project, awarded last December, would be necessary.

Ryan Barry, the NIRB’s executive director, told Nunatsiaq News that Baffinland is also working with the Nunavut Planning Commission to provide information to determine whether the proposed “early revenue” phase conforms to the requirements of the North Baffin Regional Land Use Plan.

An addition to the final EIS submission from Baffinland on its “early revenue” activities is to arrive June 28 at the NIRB, Barry said.

That will undergo an internal NIRB conformity review.

If it’s accepted, that EIS section will be subject to a public technical review period, followed by a possible technical meeting and then a final hearing, but this would be smaller in scale than those that took place last summer in Iqaluit, Pond Inlet and Igloolik.