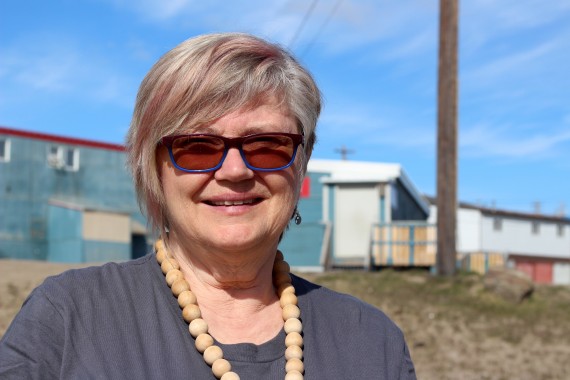 Heather Daley, who is retiring this year as the Alianait Arts Festival’s director, says this year’s festival has been the best yet. (PHOTO BY BETH BROWN)

The big top tent is packed away and international musicians who visited Iqaluit over the July 1 long weekend for the Alianait Arts Festival have all since flown back to their own countries or continued on with their tours.

“It was brilliant, the best we’ve ever done,” festival director Heather Daley told Nunatsiaq News after the wrap up of the 14th annual event.

It will also be the last Alianait that Daley oversees. The long-time director is retiring from her role this year.

“I’m passing it on. It’s not Heather’s festival. But they know I’m just a phone call away,” Daley said of the two festival coordinators who will carry on the summer festival and Alianait concert series throughout the year.

“I want to see Alianait continue,” she said. “It’s about sharing artists, back and forth.”

And the arts organization should be left in good shape. The festival finally received core funding last spring from the Department of Economic Development and Transportation.

With that kind of support, Alianait will be able to keep doing what it does best: promoting Nunavut artists.

“What was always important to me is really good sound and lighting—having a professional stage,” Daley said. “And giving these artists the opportunity to perform with artists from all over the country and all over the world.”

About 70 per cent of artists who play on Alianait stages throughout the year are from Nunavut.

But the festival has also attracted talent from Greenland, Norway, and further afield.

“They find us—we’re on the map internationally,” Daley said.

That was easy to see this year during the final festival concert July 2, when Māmā Mihirangi & the Māreikura, an all-female contemporary Maori music and dance group from New Zealand, came on stage bearing their Maori flags, while Alianait chair Mary-Lee Sandy-Aliyak waved the Nunavut flag.

“Our backgrounds connected spiritually in a very strong way,” said Sandy-Aliyak afterwards. “That touched me big time. I’m sure people got tingles all over.”

That concert didn’t end until almost midnight. There were four standing ovations at the sold-out and standing-room-only show.

For Nunavut artists, sharing a stage with big names and international talent can be a career game changer, Daley said.

“I’ve seen our artists thrive. It empowers them.”

One such artist is Abraham Eetak of Arviat, who is known on stage as Agaaqtoq. “He did the best performance I’ve ever seen him do on Sunday night,” Daley said.

Eetak has also more than once shared the Alianait stage with New Brunswick folk jazz singer David Myles. “When he performs here he always brings Agaaqtoq up on stage to perform with him,” Daley said.

Alianait staff helped write the funding proposal for Agaaqtoq’s album, and the young artist will be performing in Greenland and France this year.

“He’s ready for that. He’s an engaging performer, he writes incredible songs, a wonderful poet,” Daley said. “I don’t think those things would have happened without Alianait.”

To remember this, Daley keeps a small note left by a young drummer from Nunavik who performed in the big top tent years ago with his classmates. After the show that saw the young students share their Inuit and Brazilian drumming, festival staff found the short message that reads:

“My name is Randie Nappaaluk. I live in Kangirsujuaq. I am 11 years old. My mom’s name is Alasie and my father’s name is Ikiarialik. Today is a great day!!”

“It was held with a rock so that we would find it,” Daley said. “That’s the Inuit way.”

During the 2018 final concert, July 2, Daley was given a proper sendoff on the Alianait stage and the gift of a sealskin wall-hanging. But there was also a special goodbye for Daley that happened behind closed doors at the Elder’s Qammaq in Iqaluit.

Visiting artists went to the elders to get their blessing to share their own culture on Inuit lands. One artist performed a Saami joik and the Maori women did a haka for the elders.

While the elders readily gave their blessing to the artists, they also gathered around Daley to honour the time she has given to growing Nunavut music.

“And then they did a blessing for me,” she said, beaming. “I’ll never forget it.”