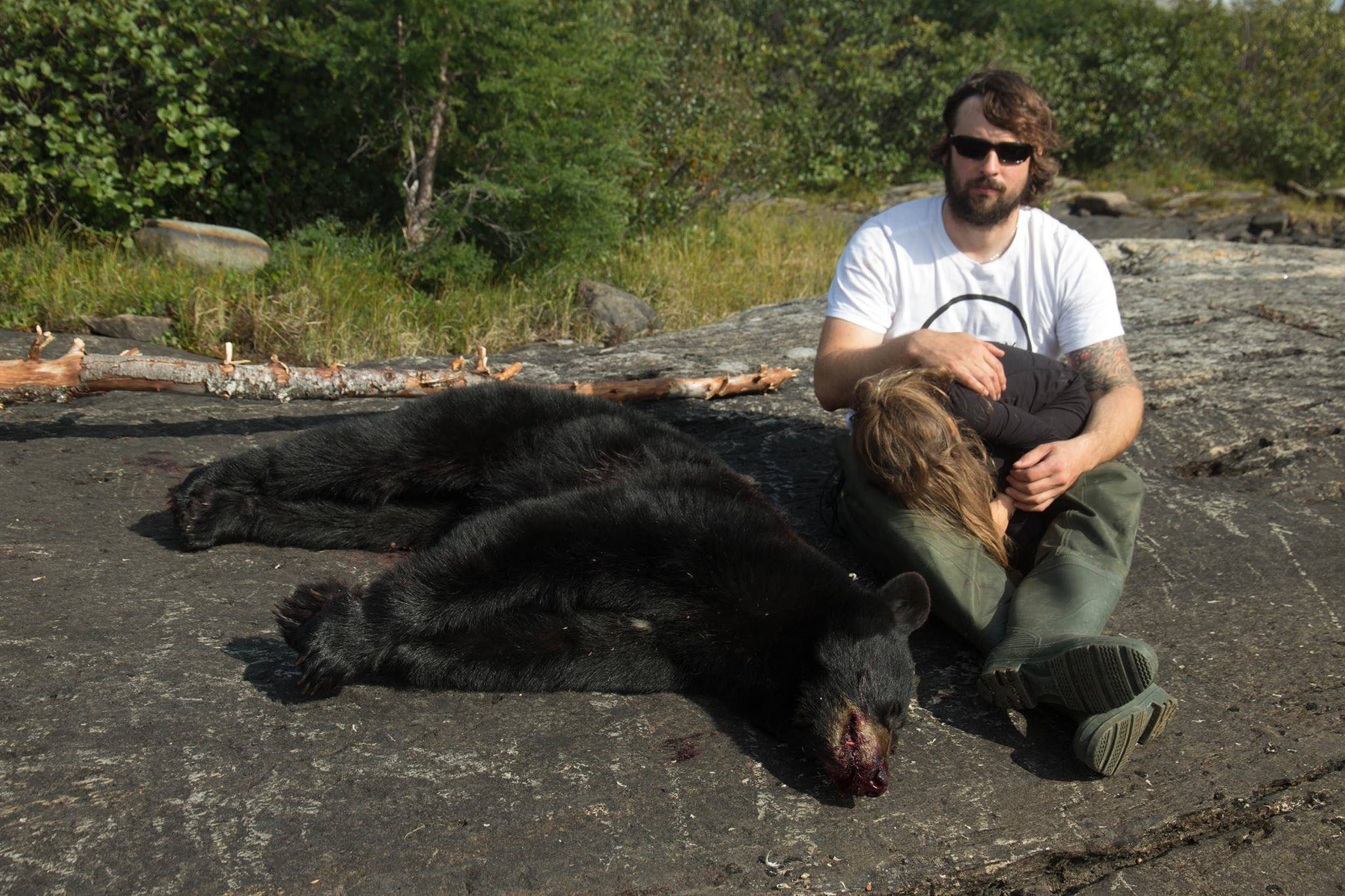 Samuel Hamel-Ratté is pictured holding his five-year-old daughter, Charlie, and seated next to the female black bear he shot and killed last weekend when the animal got within 10 feet of the young girl. (PHOTO COURTESY OF S. HAMEL-RATTE)

Samuel Hamel-Ratté has advice for anyone spending time out on the land in Nunavik these days—if you have a dog, bring it with you.

Hamel-Ratté said he wished he had his dog with him Aug. 26 when he and some friends were camping near Ferguson Lake about 45 kilometres northwest of Kuujjuaq.

The group had travelled there by float plane to fish and camp over the weekend, when they had an unexpected visitor—a black bear.

“I was fishing with some friends and my [five-year-old] daughter was alone on the shore playing and picking berries,” said Hamel-Ratté, the long-time head chef at the Kuujjuaq Inn.

Other adults were nearby on land with two other young children, but Hamel-Ratté’s young daughter was closest to a bag of egg-salad sandwiches, which appeared to draw the young female bear.

The problem was, the bag also held Hamel-Ratté’s rifle.

The bear and the bag were about 10 feet from the young girl, when the group started to yell, hoping to scare the animal away.

“We were all screaming, but my daughter didn’t see the bear, so she thought we were yelling at her,” he said.

Once the bear backed up a few metres, Hamel-Ratté got a chance to grab his bag and gun.

The bear died right away and no one else was injured in the incident. But Hamel-Ratté said he calls it “the worst day in his life” when he thinks about how close the bear got to his daughter.

He’s not entirely sure why the bear didn’t approach the girl; he figures the animal was about a year and a half old and appeared to be well-fed.

The retired dog musher said having one of his pets with him would have saved everyone the trouble. “It’s like an alarm system,” Hamel-Ratté said.

His experience isn’t unique; a number of Kuujjuamiut say they’ve had encounters with black bears in and around the Nunavik community over the summer months.

Elena Labranche was at her cabin earlier this month, which she travels to by boat. She was setting the boat when she turned to find a black bear about five feet away.

She didn’t have a weapon with her.

“I started shouting and using the rope as my whip.” Labranche wrote on a community Facebook page.

“I hit him two times in the face and it started turning away but turn again [and] started coming [towards me] again.”

Eventually the whipping deterred the bear and it left her unharmed, but Labranche posted her experience as a warning to others.

Nunatsiaq News wasn’t able to reach Quebec wildlife department officials to confirm if black bear sightings and incidents are on the rise across the region.

In Hamel-Ratté’s case, he didn’t have a hunting permit; it was considered a defence kill.

“I’m always prepared when I go out on the land,” he said. “But now, I’ll always keep my gun on me and I’ll always take my dog.”