“What hurts one group hurts us all as a human family” 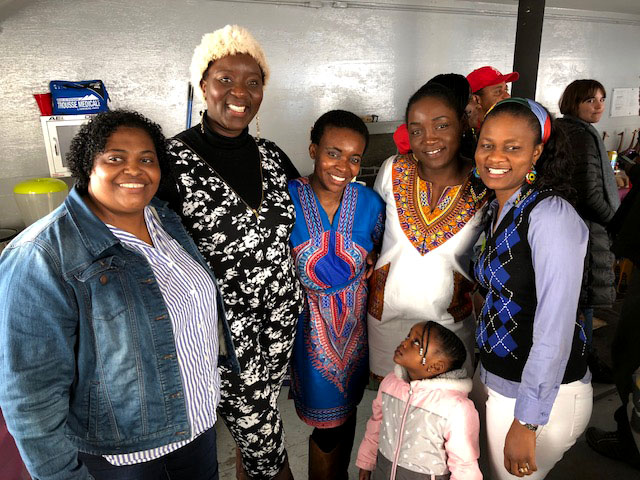 Another sign that Iqaluit is becoming a multicultural community: members of Iqaluit’s African and Caribbean community celebrate Africa Day this past May 26 at the pavilion inside Sylvia Grinnell Park, where they enjoyed fish cakes, cou-cou, spicy beans and rice. It’s likely that about 250 Iqaluit residents are of African descent. The writer of this letter encourages a continuing conversation on how Iqaluit can respond to its increasingly multicultural make-up. (FILE PHOTO)

June 23 was a special day in the life of my children.

On that day, my wife and I, and our daughter’s godparents visiting from England, were at Inuksuk High School in Iqaluit to celebrate this town’s young women and men transitioning into the next phase of their lives.

After the ceremony, I drove past Northmart to pick up a few groceries. At this point, things started to go a little sour.

While paying for the groceries at the checkout till, I was approached by what seemed to be a highly intoxicated young woman who was yelling words in Inuktitut. I looked around thinking that she was talking to someone else. However, the comments were directed at me.

I swiped my debit card and said a quick “thank you” to the cashier. The intoxicated young lady stood in my way and said in English, “Are you just going to say thank you?”

At this point, I was totally confused by this bizarre behaviour and chose to ignore this person and leave the store.

Without warning, she lunged at me and kicked my lower leg. I was partially able to sidestep and avoid the full impact of her kick and she caught the back heel of my foot instead. Her momentum caused her to lose her balance and fall down hard on the floor.

The store manager came up and quickly picked up my attacker from the floor and marched her out of the building.

Totally bemused by this behavior, I left the store and walked to my parked vehicle only to see this young lady walk by and shout a few choice profanities at me, with the word “Portugee” thrown in. The word “Portugee” is a derogatory term that refers to a dark-skinned person, usually a black person of African descent.

I am not very clear on the origins of the word. However, it seems to be a term that is peculiar to Nunavut. I brushed off this incident and took it as one of those things that one must develop a thick skin about.

I had all but forgotten this incident until Aug. 1. When I got out of my vehicle at the Northmart parking lot, an Inuk man loudly proclaimed in front of me that “too many niggers are coming to this place.”

My initial reaction was knee-jerk anger and almost immediate confrontation. I yelled an expletive at him, which in retrospect I regret, as I should not have stooped to that level.

I entered the store and bought my groceries. While paying for my groceries, I had an almost déjà vu moment—the man was standing at the entrance and starting to yell abuse at me again.

When I left the store, the man was standing outside and continued to heckle me. I warned him that if he continued with that behaviour, I would report him to the police.

I also told him that you may not like somebody for whatever reason, but there is no reason to use a racist term towards that person. I spoke loudly for the benefit of onlookers.

Racism and intolerance have no place in Iqaluit, or in Nunavut, and in Canadian society as a whole. When we look to the wisdom and guidance of Inuit Qaujimajatuqangit, tolerance is addressed in these fundamental values:

• Inuuqatigiitsiarniq: respecting others, relationships and caring for people.

• Tunnganarniq: fostering good spirit by being open, welcoming and inclusive.

Our Charter of Rights and Freedoms, in Section 6, gives all Canadian citizens and permanent residents the right to move to, and live in, any province or territory. They may also look for work or set up a business there.

I mention this section of the Charter because Nunavut, just like the rest of Canada, is becoming a multicultural society. At the last census count, at least one out of five people in Canada identified as a visible minority, and with globalization this proportion is set to increase over time.

Between 2011 and 2016, 1.2 million new immigrants settled permanently in Canada.

For the first time, Africa ranks second, ahead of Europe, as a source continent for recent immigrants to Canada, with a share of 13.4 per cent in 2016.

Asia, including the Middle East, remains, however, the top source continent for recent immigrants. In 2016, the majority of newcomers to Canada, 61.8 per cent, were born in Asia.

As Nunavummiut, we must unite as neighbours and stand against any form of discrimination or hate speech directed at anyone. It should never be appropriate to say “those white people,” “those Inuit,” “those blacks,” “those Indians,” “those Asians,” or “those gays and lesbians” in a negative and derogatory manner.

What hurts one group hurts us all as a human family. We should not dehumanize another person just because they look different or speak with an accent.

In closing, I would invite citizens of Iqaluit to engage in a respectful dialogue about how we can deal with our increasingly multicultural society, the changes and impacts on the local population, and some possible best practices in this ever-evolving conversation.

Most important, let’s unite against any form of racism, abuse or hate speech directed at any person or group of people. Let’s foster love, inclusiveness and good spirits.

(Editor’s note: We contacted the writer of this letter, verified his identity and established that his account of these racial abuse incidents is genuine. He asked that his name be withheld to protect his family from any backlash.)