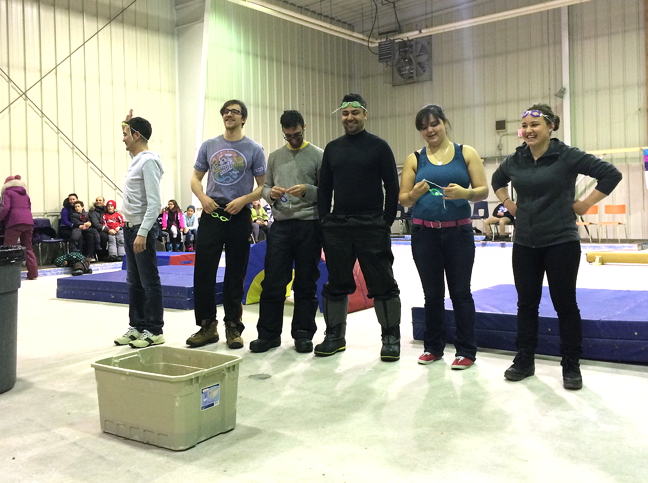 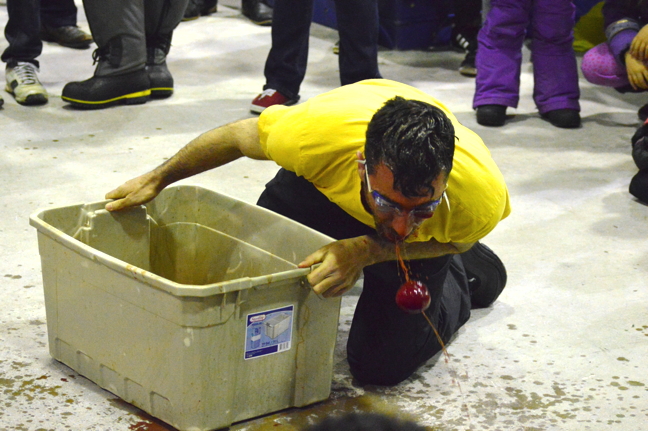 Among other things, fear factor contestants had to bob for plums in a vat of seal blood and organ meat. (PHOTO BY STEVE DUCHARME) 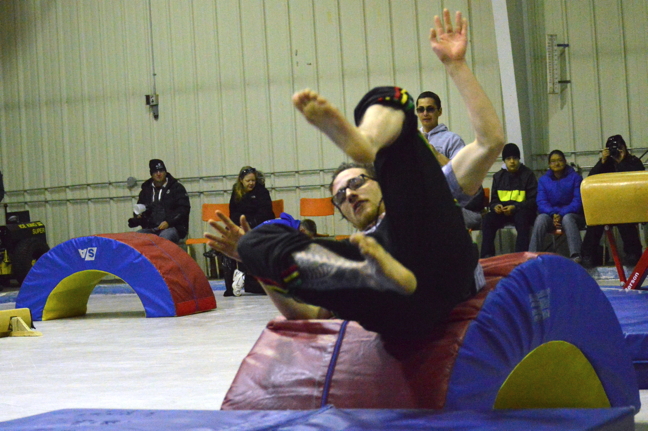 Oopsy Daisy — after the blood and guts, fear factor contestants had to run an obstacle course. (PHOTO BY STEVE DUCHARME)

Vegetarians may have had a tough time at the annual Toonik Tyme Fear Factor competition held April 23 at the Iqaluit curling rink.

That afternoon, a crowd of about 100 spectators huddled around six contestants chosen by lottery to sample a variety of northern delicacies and compete for a chance to win a free ticket south courtesy of Canadian North.

What was on the menu, you ask?

Toonik Tyme organizer, and Fear Factor host, Travis Cooper was happy to unveil the daily specials to a round of groans from the audience.

The games began with an entrée of plums floating in a vat of seal organ stew in a broth of aged seal blood.

One by one, contestants donned swimming goggles and bobbed for the plums with their teeth, often emerging red from the neck up and gasping for air.

The contestants showed little regard for the nearby audience, splattering them with blood, and errant plums, as they frantically sought to complete the challenge in the shortest time.

Next, for dessert, two live earthworms.

After eating the worms, contestants immediately stuck their head into a container of rotten meat, breathing in the fumes for three minutes straight.

The rotten meat fumes was an added aperitif, Cooper explained to the crowd, thanks to faulty refrigeration.

“They were supposed to eat it,” he said with a grin.

Last but not least was a short obstacle course, comprised of several hurdles, some crash mats, and ten vertigo-inducing spins around a walrus penis-bone followed by a stroll on a balancing beam.

Iqalungmiut Rachel Michael proved herself champion of this year’s Fear Factor challenge. Evidently fear was not a factor for her.

“I’ve wanted to do this since I was 16,” Michael told Nunatsiaq News after the competition.

“Every year I wanted to be that person that gets into dirt or into the grime and just have fun.”

Michael said the worst part of the competition was bobbing for the plums, adding that they were hard to distinguish from the other contents in the bloody vat.

“You think you grab the plum but you grab the intestine or something else, and it’s not a good taste,” she said.

Michael says she’ll go to Ottawa with her free ticket, to visit her best friends who are about to graduate from school there.

Toonik Tyme, which began April 15, wrapped up this year’s festivities with a community feast and a pair of concerts on the weekend.

Inuktitut band Kamaalukutaat played a free concert at the curling rink, while the Jerry Cans and Salluit’s Elisapie Isaac performed at a ticketed event at the Iqaluit Legion.

The night ended with a fireworks display near the Road to Nowhere.

Due to forecasted heavy winds and whiteout conditions on April 24, Toonik Tyme’s annual Kimmirut Race, along with the elders and youth snowmobile race, got postponed to Sat., April 30.