RCMP members walk near a unit in Creekside Village where a man had barricaded himself early May 2. (PHOTO BY THOMAS ROHNER) 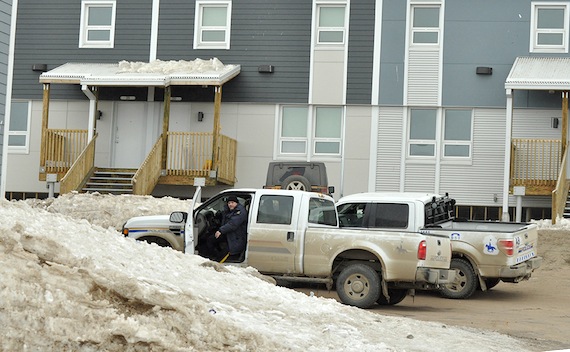 RCMP vehicles are parked beside a unit in Iqaluit’s Creekside Village at 8 a.m. May 2. (PHOTO BY THOMAS ROHNER)

Iqaluit resident Tommy Josephee faces three charges related to a 12-hour standoff in Nunavut’s capital May 2 — the second such incident in Iqaluit to occur that week.

Josephee, 27 was scheduled to appear in Iqaluit court May 4 on charges of mischief, criminal harassment, and possession of a weapon for a dangerous purpose.

Late May 1, RCMP officers were called to a home in the city’s Creekside Village complex, where a distraught man had barricaded himself inside a rowhouse unit with a weapon.

Just before noon the following morning, police were seen leading the man away in handcuffs.

“Nunastar Properties would like to extend a well deserved Thank You to the RCMP and Iqaluit Municipal Enforcement for their fast and professional handling of the situation in Creekside Village. Peaceful ending, best possible outcome,” said Tim MacLeod of Nunastar, which manages Creekside Village, in a message posted on the Iqaluit public service Facebook page after the standoff ended.

The first official confirmation of the standoff came at 7:45 a.m., May 2, when RCMP Sgt. Yvonne Niego told Nunatsiaq News that Creekside Village, the rowhouse complex also known as “white row” by people in Iqaluit, was sealed off.

“The area around white row is being cordoned off,” Niego said.

An RCMP news release issued later, at 8:30 a.m. May 2, said that on May 1 at about 11:45 p.m., Iqaluit RCMP began receiving calls about a distraught male, 27 years old, within a residence in Creekside Village.

Residents of Creekside Village living within the odd-numbered 200 block and the even-numbered 300 block were asked to remain inside their units, police said.

“All others in the village are asked to avoid staying in the area outside and in between the Village units,” the release said. “Patience and understanding of Iqaluit residents is appreciated.”

The standoff and lockdown at Creekside Village affected many Nunavut Arctic College students and their families.

About 37 college students have been staying in Creekside Village units.

That’s because the college’s Ukkivik student residence was damaged last week by a fire, in which a man, 34, has been charged with arson.

At 9:30 a.m., not far from where the standoff took place, swearing, yelling and shouting by a man could be heard.

But few bystanders were around, perhaps due to the weather, which featured light snow, winds of up to 47 kilometres per hour and a windchill of -12 C — although some curious kids walked around and construction work continued nearby.

The Creekside Village incident closely follows a 42-hour standoff in the Happy Valley area of Iqaluit this past week, which ended peacefully April 30.

On May 1 in Iqaluit, the RCMP convened a news conference at the “V” Division headquarters to discuss that standoff.

Mike Jeffrey, Nunavut RCMP Chief Superintendent, credited the patience and professionalism of police officers for the peaceful resolution of that standoff, which involved a 26-year-old man, and thanked Iqaluit residents for their patience and outpouring of support.

“We don’t want these types of situations to happen again because it puts everybody at risk in the communities,” Jeffrey said.

Community involvement and connectedness are key to good mental health, said Nunavut health officials in a message they want Nunavummiut to reflect on during mental health week, which runs May 4 to May 10 across the country.

With files from Jane George and Thomas Rohner 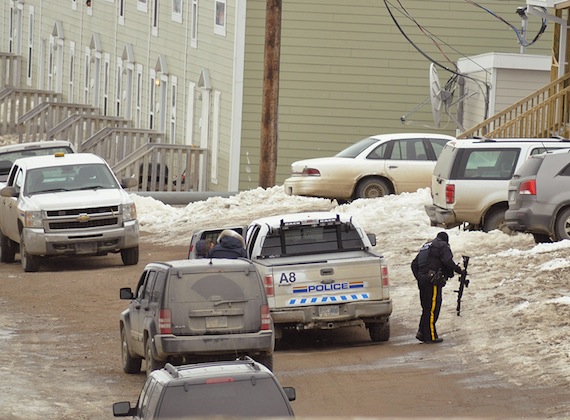 An RCMP officer checks his gun moments after a handcuffed male was put into the back of the RCMP truck beside the officer. The standoff, which started around midnight, ended when the last RCMP truck drove off at 11:53 a.m. and road blocks were taken down. (PHOTO BY THOMAS ROHNER)