UPDATED: Nunavut review board says no to Kiggavik uranium mine 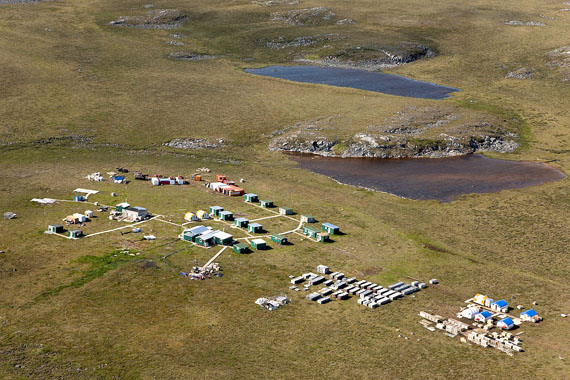 An aerial view of the exploration camp at Areva’s Kiggavik uranium project near Baker Lake. The Nunavut Impact Review Board has said no to Areva’s proposal to turn its exploration project into a uranium mine “at this time.” (FILE PHOTO)

After a lengthy environmental assessment process that began Jan. 16, 2009, the Nunavut Impact Review Board says Areva Canada’s proposed Kiggavik uranium mine “should not proceed at this time.”

A NIRB news release issued May 8 said that because Areva cannot provide a definite start date or development schedule for the project, an accurate assessment of future environmental and social impacts cannot be done right now.

“The Kiggavik Project as presented has no definite start date or development schedule. The board found that this adversely affected the weight and confidence which it could give to assessments of future ecosystemic and socio-economic effects,” the NIRB said in a release signed by the board’s chair, Elizabeth Copland.

The NIRB has given this recommendation to Bernard Valcourt, the minister of Aboriginal Affairs and Northern Development, in a separate letter.

Under Article 12 of the Nunavut Land Claims Agreement, Valcourt may:

• reject the report on the grounds that the project is in the national or regional interest; and

• if Valcourt rejects the report, ask NIRB to consider terms and conditions that should be attached to a project approval.

But the NIRB also said today’s decision does not rule out the possibility of a uranium mine at Kiggavik in the future.

“The Board intends that the Kiggavik Project may be resubmitted for consideration at such future time when increased certainty regarding the project start date can be provided, and so enable the Board to make more definite and confident assessments having regard to the enduring significance of caribou, fish and marine wildlife for Nunavummiut,” the NIRB release said.

The NIRB’s May 8 final hearing decision, letter to Valcourt and press release are all available on the NIRB’s FTP site.

The review board held final public hearings on the Kiggavik proposal this past March 3 to March 14 in Baker Lake, where numerous government agencies, non-governmental organizations and Baker Lake residents weighed in on Areva’s 10,000-page environmental impact statement.

Opponents of the proposal, such as the Nunavummiut Makitagunarningit group, said the Kiggavik proposal poses a serious risk to the long-term viability of the Kivalliq region’s caribou herds and that its environmental risks outweigh its economic benefits.

And the Baker Lake Hunters and Trappers Organization said Areva’s uncertain start date for the project means that the environmental review in March was essentially a waste of time.

The Kivalliq Wildlife Board also passed a motion among its member opposing the project.

However, Areva spokesperson Barry McCallum said, this past March, that Areva firmly intends to one day build a uranium mine.

“It’s always been our plan to make a decision after the environmental assessment process,” he added. “We have been mining uranium in Canada for decades and [Kiggavik] is in our plans,” McCallum said in March.

Many countries that use nuclear energy cancelled or reduced their nuclear power programs, leading to falling demand for uranium.

Right now, uranium prices sit at around $38 a pound, well below the $70 a pound price that customers paid just before the Fukushima incident.

For that reason, Areva has said that they want to develop Kiggavik only after market conditions improve.

Areva Canada had proposed to spend at least $2.1 billion to construct the mine, which has been at the exploration stage for decades.

The Kiggavik scheme, which would have been located at two sites, Kiggavik and Sissons, comprised four open pits and one underground operation, with an estimated lifespan of about 12 years, with a three to four year construction period and a decommissioning and monitoring period of about 10 years.