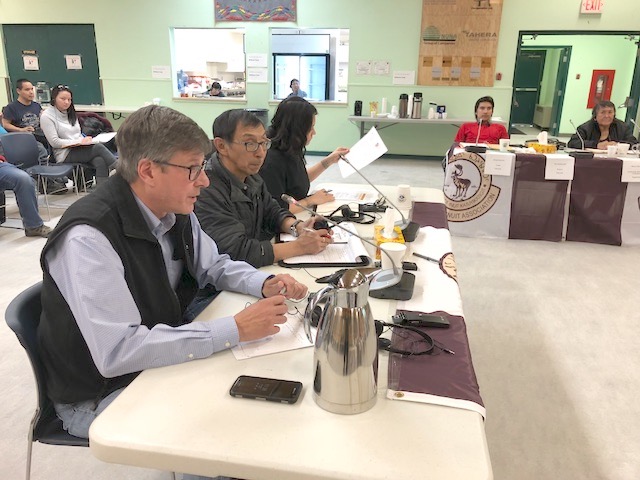 John Stevenson, the COO of Kitikmeot Corp., speaks to the annual general meeting of the Kitikmeot Inuit Association in Cambridge Bay on Oct. 16. Next to Stevenson is David Omilgoitok, the president and executive director of the business development arm of the KIA. (PHOTO BY JANE GEORGE)

CAMBRIDGE BAY—No $100,000-dividend cheques were handed to the Kitikmeot Inuit Association by its the business arm, the Kitikmeot Corp., at the KIA’s recent annual general meeting in Cambridge Bay, as was done in 2015.

No financial information about KC was provided either, when the corporation presented its report to KIA delegates.

John Stevenson, KC’s chief operating officer, told Nunatsiaq News later that because KC is a privately owned corporation, it doesn’t have to share its financial information.

But Stevenson described the finances of KC as “robust.”

Over the past year the KC sold its pharmacy and sold Cambridge Bay’s Kitikmeot Centre building, which are both now owned by the North West Co. retail chain, as well as a residence.

The KC has also shipped a lot of unused equipment out of Cambridge Bay as part of an effort to clean up the area around the dock, which was once on the outskirts of town but is now an eyesore in the middle of the community of about 1,900, he said.

Since 2015, KC has been the sole owner of the Cambridge Bay–based Kitnuna Corp., which manages a handful of subsidiary companies that operate in Nunavut’s western region.

Kitnuna, which provides services including fuel supply, project management, general contracting and environmental remediation, was originally a 50-50 joint venture between Nunasi Corp. and Kitikmeot businesses until Nunasi transferred its shares to KC.

A few years ago, KC admitted that Kitnuna had taken a blow when Newmont Mining Corp. pulled out of the Hope Bay mine project, since acquired by TMAC Resources Inc.

Kitnuna is now “restructuring,” KC’s president David Omilgoitok said at the KIA meeting, and KC has brought back Tim Zehr, the former president and chief operating officer at Nunasi Corp., to sort out the business and ask “more difficult questions” about Kitnuna’s future.

While it’s hard to gauge how well Kitnuna is doing financially, its Inuit employment targets appear to be unmet. At the AGM, Omilgoitok said KC has had problems getting Inuit involved in its subsidiary companies working at TMAC, but promised to “double-down” on efforts to hire more Inuit by hiring an employment advisor.

“At the heart of it, not every Inuk wants to work in a mine, even one run by a great company like TMAC Resources,” he said. “Instead of fighting amongst ourselves on how to shoehorn more Inuit into mines, I want to focus on helping our people realize their professional goals, and let’s be clear, mining should certainly be a major part of this, especially in our part of the world.

“Instead of finger-pointing, let’s pursue decisions that work in the world as it is, not the world we would want it to be.”