Heavy machinery gets to work June 14 by the shoreline in Cambridge Bay to dig a trench — one of the urgent efforts taken by Kitnuna Corp. to contain an spill of waste oil. (PHOTO BY RED SUN PRODUCTIONS) 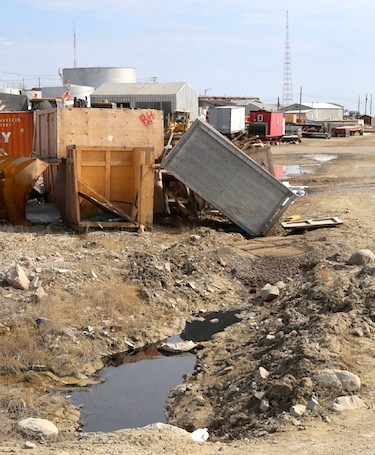 Waste oil sits in a drainage ditch June 14 near the site of a waste oil spill on the property of Kitnuna Corp. in the western Nunavut town of Cambridge Bay. (PHOTO BY RED SUN PRODUCTIONS)

Sunny, warm nights, gangs of unsupervised kids roaming around town, and a tank filled with waste oil: that’s the combination of factors that led to a June 14 waste oil spill in Cambridge Bay.

Since then, Kitnuna Corp., the Inuit-owned company, which provides project management, construction, building supply sales, expediting, environmental and fuel services in western Nunavut, has been working around the clock to clean up the mess.

Meanwhile, police have identified the young teenagers believed to be responsible for causing the spill.

Sometime during the early hours of June 14, the teens are alleged to have turned on the valve on a container, which held up about 11,000 litres of waste oil (about 2,500 imperial gallons, according to Kitnuna) — and then walked away.

“It’s one thing to open a valve and turn it and say ‘we sure screwed up on this one,’ but just to willfully open a valve and walk away and leave it running” — that’s something Norm Jackson, Kituna’s director of business development, says he has trouble understanding.

Kitnuna was first alerted to the spill shortly before 8 a.m. June 14 by a caller who had seen oil running down the drainage ditch by Kituna’s yard and building.

But by then the oil had already reached the bay.

Kitnuna staff, with many others from the airport, the Martin Bergmann research vessel that anchors near Kitnuna, and the hamlet, came to assist. About those combined efforts, Jackson said “I really impressed by our guys and the other people who helped.”

Heavy machinery worked to dig trenches to stop the oil from spreading, booms were laid out on the water to contain the oil that reached the bay, and absorbent padding was set out on the land to take up the oil that had spilled there.

Vacuum trucks took up the rest of the oil and contaminated soil.

By June 17, most of the waste oil that spilled out was removed, Jackson said.

Everyone was grateful that the sunny, clear weather and on-shore breeze collaborated to keep the oil that did each the shore from moving further out, he said.

Workers will continue to remove oil-soaked rock and a vacuum truck will remain on standby, Jackson said.

As for who pays for the overtime involved in the oil clean-up or any other financial repercussions from the spill, Jackson couldn’t say.

Since June 14, Kitnuna has “placed locks on everything,” Jackson said.

“What I’d like to see is some law enforcement presence between 2 a.m. and 6 a.m. in the morning. Kids are out all night long,” he said. “The kids are ruling the streets.”

While some people in Cambridge Bay, who comment on its Facebook news page, say Kitnuna should have had everything locked up before the spill took place, more say that the kids and their parents should be held responsible.

“Kids need to know and understand respect for others property! Kitnuna is partially to blame… but you can’t pin the whole thing on them. The people who opened the valve need to held responsible as well… kids or not. Wrong is wrong,” said one commenter.

“Teach them respect, discipline and good manners and things like this won’t happen,” said another.