Firm delays controversial coal project for at least a year 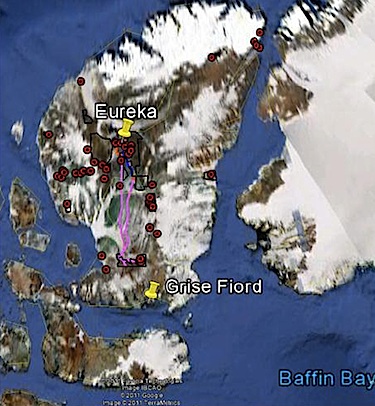 Canada Coal Inc. announced Dec. 17 that it has withdrawn all project applications submitted to the Nunavut Impact Review Board and will delay exploration activities on Ellesmere Island for at least one year while it works on a new project proposal.

In response, the review board has terminated its screening of the Canada Coal project — but will start a new screening if the company submits a new proposal.

In a news release, the company said it’s taking these actions because it needs time to do more consultation with the people of Grise Fiord.

To that end, Canada Coal said it will participate in a joint working group with the community and “certain regulatory bodies” to figure out how to move the project forward while “addressing the concerns of all stakeholders.”

This past February, Liza Ningiuk, the mayor of Grise Fiord, along with Jaypeetee Akeeagok, the chair of the hunters and trappers organization and Larry Audlaluk, the chair of the local community land and resource committee, all said in a letter that they don’t support Canada Coal’s exploration plans for Ellesmere Island.

At the same time, paleontologists and archeologists throughout North America have raised questions about possible damage to the area’s priceless fossil sites.

The company held a consultation meeting at Grise Fiord in July 2013 to talk about water management, wildlife and the preservation of heritage resources.

“Although the meeting was well attended for the small hamlet, many of the local hunters were absent due to seasonal work,” the company said in its news release.

So in November 2013, Canada Coal held another meeting in Grise Fiord, this time with representatives from Aboriginal Affairs and Northern Development and the Qikiqtani Inuit Association.

The company said “it was agreed that more consultation with the community was required.”

The heart of the project is a set of coal deposits in an around the Fosheim Peninsula believed to hold hundreds of millions of tons of coal and covering about 1.7 million acres.

The company has relinquished licences for coal that it held for locations on Axel Heiberg Island, site of a famous fossil forest.

But it will hold or renew to its Fosheim Peninsula licences.