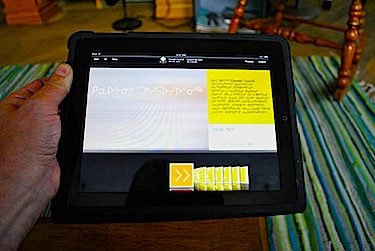 An iPad user in Iqaluit was able to download the new Canada Council for the Arts Inuktitut-language app, or software application, on his iPad. (PHOTO BY JIM BELL)

The Canada Council for the Arts has launched what is believed to be the country’s first Inuktitut-language app for iPads, iPhones, iPod touches and Google Android devices by creating a tool the agency hopes will help attract more Inuit artists to its grant programs.

The app, short for “application software,” is a program that connects a phone or tablet device to the internet to perform a specific task — and this one communicates with users in Inuktitut syllabics.

This app is a free application that runs on Apple’s mobile devices and through Google Android, showing users how to apply for a grant available through the website of the Canada Council, which hands out money to artists, musicians and writers across Canada.

“We know that there are tons of artists in the North,” said Sarah Rushton, a spokeswoman with the Canada Council for the Arts. “And we know that the number of [northern] applicants we normally get doesn’t correspond to that.”

Through an advisory group that works with northern artists, Rushton said the council learned about the barriers that Inuit artists face in accessing federal grants – one of those being the lack of information in their own language.

In 2010-11, the council received 23 grant applications from Nunavut and awarded $281,000 in arts funding – all to individual artists or organizations in Igloolik and Iqaluit.

There isn’t data on other Inuit regions in Canada, but the council estimates there are somewhere between 3,000 and 6,500 artists living in Nunavut alone.

The council is home to an aboriginal arts office and offers some grant programs designated for aboriginal traditional visual arts, Rushton said.

And information on how to apply and deadlines is also available in Inuktitut through the agency’s website.

But the council hopes the new tool will help encourage more Inuit artists to apply.

Creating the app was a challenging task, say its designers from the Ottawa tech firm FaveQuest.

“On the iPhone, you can flip into a set-up screen and pick from the dozens of languages and regional dialects from around the world,” said Bill Love, FaveQuest’s co-founder and president. “But of course, there’s no Inuktitut.”

So FaveQuest had to create the language specifically for the app and tell it to override the phone’s default settings.

At first, the company planned to use images of a page of syllabics embedded into the app. But they were able to go beyond that, Love said, with the help of font sets provided on the Government of Nunavut website.

So Love and his colleagues, working with an Inuktitut-speaking consultant, put the font directly into the app and labelled the buttons from the software.

One page of the app explains that applicants will receive notification in the mail on the status of their application.

That is illustrated with the image of a mailbox along a country road – not a scene found in the Arctic.

So instead, Love and his colleagues used the image of a row of red mailboxes common to post offices across the North.

“I found it fascinating — it’s such a unique language,” he said.

And now that FaveQuest has created one app in Inuktitut, the company hopes it might attract interest in more Inuit language apps.

“We’ve been through it now,” Love said. “It puts us in a very good position to do other apps, if a company wants.”

And the chances are likely, he said, as demand for mobile phone software grows.

But while the introduction of an Inuktitut app is good news for language advocates across Canada’s North, the technology that supports it must also be brought up to speed.

Currently, Apple’s iPhone is not reliable in much of the North since it runs on HSPA systems, which aren’t supported by the satellite that provides cell and internet service to Inuit communities.

So, in order to download the Canada Council app, northern users with Apple devices must gain access to it through a wi-fi internet connection.

But Canada council officials said that in various meetings with Nunavut’s arts community, the iPad, iPhone and Android devices came up as the devices of choice when viewing apps.

The agency says it is now working on a phase two of the app, which will target Blackberry users.

In the meantime, a new Facebook group is calling on Bell Canada — which manages Nunavut’s network via Northwestel — to upgrade its CDMA technology, which cannot fully support the iPhone.

The group, called “Please bring iPhone 4S and other smartphones to the North” says they’ve been told by Bell Canada that the company does not plan on making iPhones available on the CDMA network.

“Let’s tell Bell that those of us that live in the most remote and isolated communities of Canada are the ones who need the connectivity the most!” says a note posted on the group’s site.