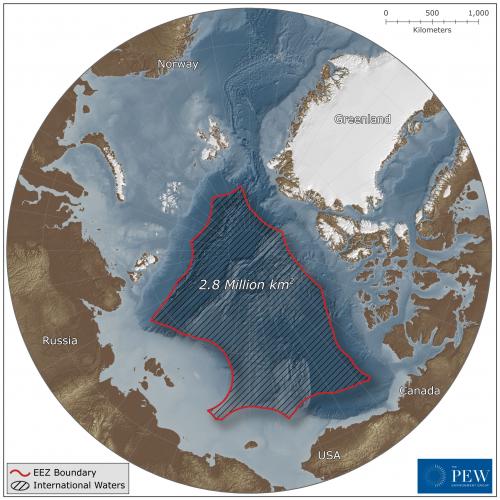 Two federal cabinet ministers said April 24 that more research on fish stocks should be done prior to the development of commercial fishing in those Arctic waters that lie outside the legal control of any single country.

They issued the statement in response to an open letter signed by more than 2,000 scientists and released April 22 by the Pew Environment Group.

The letter raised alarm bells about the health of fish stocks in the central, international section of the Arctic Ocean, which under international law, lies outside any single country’s economic zone.

The scientists said until more research is done and management measures established, commercial fishing should be banned in the region.

That’s because the rapid reduction of sea ice is making the area more accessible to fishing vessels.

Almost all industrial commercial fishing in the Canadian Arctic occurs in Baffin Bay and Davis Strait, inside Canada’s 200-mile economic zone and far away from the international waters cited in the Pew Group’s letter.

But two federal ministers took the issue seriously enough to put out a response anyway.

“We also understand that any possible future commercial fishery in the international Arctic Ocean must be governed by effective management and conservation measures that are based on sound scientific advice, in consultation with Northerners and are agreed upon internationally,” they said.

To that end, Canada must continue talking to the other four Arctic Ocean states, including the United States, Aglukkaq and Ashfield said.

This means more research on the migration of fish stocks using both science and traditional knowledge.

“Our government understands the importance of fisheries for Northerners. Fish provide our people with sustenance, livelihoods and is a part of our traditional way of life,” the two ministers said.