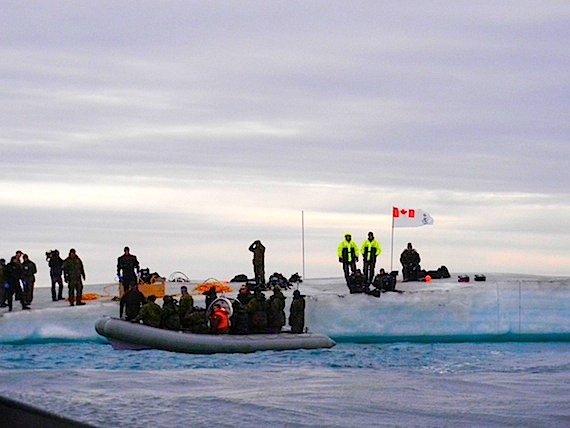 Canadian Navy divers prepare to descend into the icy water during a previous military exercise in the High Arctic. (FILE PHOTO)

Snowmobiles park near the Cam Main North Warning Station during an earlier Nunalivut sovereignty exercise near Cambridge Bay. Starting late next month, the Canadian Armed Forces will be back in the western Nunavut community for Operation Nunalivut 2018. (FILE PHOTO)

The Canadian Armed Forces has many plans already in place for its annual Nunalivut spring sovereignty exercise, which the Nunavut Impact Review Board is now reviewing.

Every year since 2007, the military, backed by the Canadian Rangers, has headed north to test its soldiers and equipment in cold weather conditions.

This year, according to a Department of National Defence submission to the NIRB, most of the exercises during Nunalivut 2018 will take place in Cambridge Bay, the home of the Canadian High Arctic Research Station, with some planned for Resolute Bay, where the Canadian Armed Forces Arctic Training Centre is located.

Involving about 300 Canadian Forces members, Operation Nunalivut 2018 will take place from Feb. 23 to March 19, with patrols on the land, on the sea ice, underwater and in the air.

International observers may also participate in Nunalivut 2018, the DND said.

During the exercises, the Joint Task Force North plans to establish its headquarters in Cambridge Bay, with about 20 members and 40 support personnel.

If you live in Cambridge Bay, you’ll see lots of aircraft, including CC-177 (Globemaster), CC-138 (Twin Otter) and CC-130 (Hercules), which will provide transportation, resupply and possible casualty evacuations out of the western Nunavut hub.

Near Cambridge Bay, out on the sea ice, a team of about 50 divers from various services will be supported by members of 1st Canadian Ranger Patrol Group, and, from March 3 to March 17, patrols and diving operations will take place there.

In Resolute Bay, a Canadian Army company will be supported by Rangers for a total of about 90 personnel. They’ll participate in patrols on the sea ice in the vicinity of Resolute Bay, conducting training in Arctic survival skills.

In Resolute Bay a task force headquarters will bring in about 20 members with an additional 40 support personnel.

It is submission to the NIRB, the DND said “all members participating in Op NU 18 will employ environmental stewardship and best management practices to ensure that the land is not impacted.”

Measures include carting out about 100 pounds a day of human waste, produced in the field, which will be “collected (bagged) and shipped south for proper disposal.”

Other possible impacts of Op Nunalivut 2018 include:

• More greenhouse gas emissions due to the number of vehicles involved. ”However, due to the relatively short duration of the activity, and the use of new lower emission vehicles, impacts to the atmosphere are expected to be minimal,” the DND said.

• Waste may be windblown onto surrounding locations. “However, every effort will be made to ensure this does not happen; therefore, the impact is considered to be easily mitigated and insignificant.”

• Fuel leaks or spills. “However, all units traveling outside Resolute Bay or Cambridge Bay will have spill cleanup supplies, and will be instructed on their use; therefore, the potential for a malfunction and/or accident to cause any significant impact is low.”

Public comments on the DND’s plans closed yesterday, although judging by past decisions, the DND plans are likely to be approved. You can take a look at the submission on the NIRB website.

An earlier version of this story contained information that the Department of National Defence has since revised and updated.