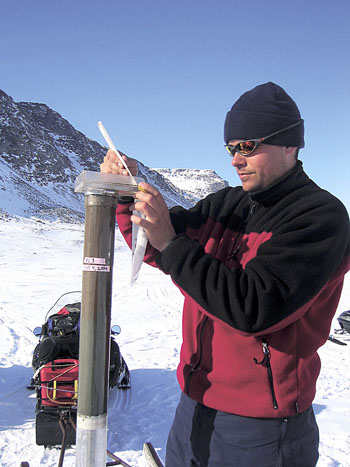 A researcher takes an ice-core sample from a site on Baffin Island in 2005. (FILE PHOTO)

A major study of Arctic ice trends over the past 1,450 years — published this week in the high-profile journal Nature, and confirming the “unprecedented” severity of the region’s ongoing meltdown — was carried out using a Canadian government-owned “archive” of glacial ice cores that was at the centre of a recent controversy over its future.

The study, co-authored by Geological Survey of Canada ice scientist Christian Zdanowicz and five other researchers from Canada, Chile, Norway and the U.S., concludes that the record-setting summertime retreat of sea ice witnessed during the past decade exceeds any Arctic thaw in more than 14 centuries.

While satellite imagery from the past 30 years provides the only direct record of the annual expansion and retraction of Arctic sea ice, the research team used a host of “proxy” indicators, including glacial ice cores from Canada and other countries, as well as tree rings and lake sediments, to reconstruct an approximate picture of annual ice retreats beginning around AD 560.

The GSC ice-core collection consists of hundreds of metres of cylindrical shafts of ice gathered during the past 40 years from High Arctic glaciers and frozen mountaintops, including Canada’s highest peak, Mount Logan, as well as Ellesmere, Baffin and Devon islands.

Stored in metre-long sections in a commercial refrigeration facility in Ottawa, the ice-core collection preserves up to 80,000 years of Canadian climate history, allowing federal scientists to probe the samples with microscopes and other instruments to reconstruct past temperature, precipitation and contamination patterns.

A spokeswoman with Natural Resources Canada, the federal ministry that encompasses the Geological Survey of Canada, confirmed Thursday that the country’s ice-core collection was employed in the Nature study to help reconstruct the ancient climate of the Arctic.

“Both the duration and magnitude of the current decline in sea ice seem to be unprecedented for the past 1,450 years,” the authors conclude in the Nature article. “These results reinforce the assertion that sea ice is an active component of Arctic climate variability and that the recent decrease in summer Arctic sea ice is consistent with anthropogenically forced warming.”

In other words, the study represents a significant contribution to the ongoing societal debate over climate change, bolstering the widespread view among scientists that the modern spike in carbon-dioxide emissions from factories, cars and other human sources is driving changes to the global climate.

“We’re trying to put the recent observations about the ice decline into a long-term perspective,” Zdanowicz told Postmedia News on Thursday, adding that the challenge has been to interpret whether the extreme thaw witnessed in the past decade is a predictable part of a natural, historical “cycle” or is “highly unusual.”

Data collected for the study show two significant periods of sea-ice retreat in the late 1500s and early 1600s.

But the scientists observed that “the impact of anthropogenic [man-made] warming on Arctic sea ice became detectable from the early 1990s onward,” and that while “the present decline in sea ice is occurring at a pace seen in earlier episodes,” the “sustained trend (now nearly 50 years long) is unprecedented in the 1,450-year reconstruction period presented here.”

In September, Zdanowicz sparked an uproar when a letter he sent to fellow ice researchers warned that Canada’s ice-core collection — the same one he had tapped for the Nature study, which was submitted to the journal last December — faced “shutdown” and possible destruction because of shifting research priorities in the federal department.

“Before we proceed with destroying the collection,” Zdanowicz had stated in September, “we wish to ensure that the core holdings be made available to researchers with an interest in using them for climate and atmospheric studies.”

Zdanowicz’s depiction of the collection’s fate was quickly challenged by senior departmental officials at the time.

In September, David Scott, manager of the GSC’s northern research branch, acknowledged that the department faced “hard choices” and was ending its use of the ice cores for the kind of climate-focused research conducted during the last several decades.

Instead, he said, NRCan’s research priorities were shifting to studies of permafrost and the monitoring of glaciers.

Scott said at the time that GSC officials were still planning to “extract additional scientific value” from the ice-core collection by arranging greater access for outside researchers wishing to make use of the resource.

And he insisted that the ice archive remained a valuable resource that took decades to create and would not be destroyed, even as the GSC wound up its own ice-core research program.

Scott conceded at the time that shifting priorities can be “frustrating” for scientists who have invested years in ice-core research and are now being directed to other fields of study.

Serge Dupont, the NRCan deputy minister, also said at the time that Zdanowicz’s letter about the ice-core collection “was not approved by GSC senior management.”