We’re in the Baffin to stay, Canadian North says 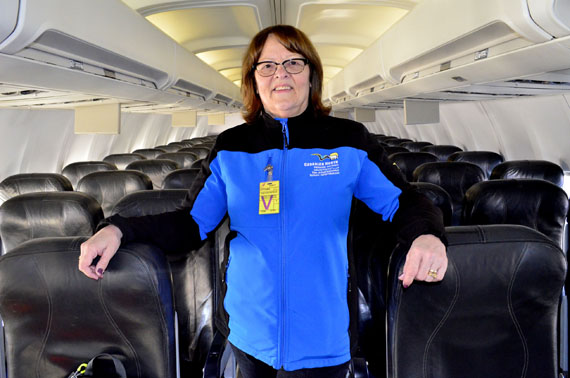 Lorraine Bonner, Canadian North’s vice president of scheduled services, stands in the cabin of the airline’s new Boeing 737-300 combi-jet, which began service Jan. 2 on the Iqaluit-Ottawa route. ““So we have announced that we’re in the Baffin to stay. We’re not pulling back…,” Bonner said. (PHOTO BY JIM BELL) 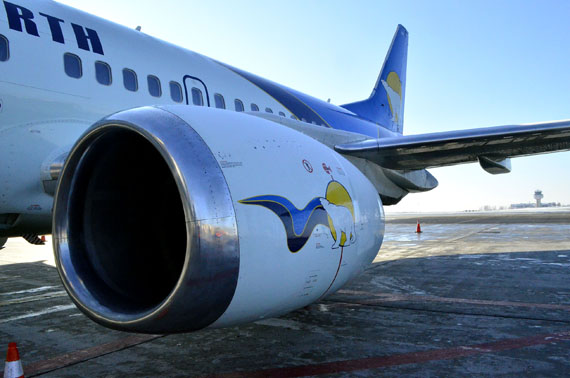 With the Jan. 2 launch of a refurbished Boeing 737-300 combi-jet on its Iqaluit-Ottawa route, Canadian North Inc. signalled this week that despite the end of codeshare, they’re in Nunavut’s Qikiqtani region to stay.

The airline first intended to start using that aircraft for its Iqaluit-Ottawa service in March 2017.

But after First Air announced its codeshare pullout this past November, Canadian North decided to bring the new aircraft into the Baffin region earlier.

“So we have announced that we’re in the Baffin to stay. We’re not pulling back because of that change,” said Lorraine Bonner, Canadian North’s vice president of scheduled services.

Bonner said Canadian North’s Ottawa-Iqaluit route has gained in popularity over the past two years and the company wants to continue building on that growth.

“We felt we need to enhance our position by bringing the aircraft in earlier and allowing us to continue to increase our market share. Actually, in the last two years, we’ve definitely gained more of the Ottawa-Iqaluit market,” she said.

Canadian North has converted its new 737-300 into a combi-jet, meaning its cabin can be reconfigured to carry passengers and freight at the same time.

This aircraft is capable of operating in full passenger mode, with 120 seats, or full freight mode.

Bonner said the configuration they’ll use most often on the Iqaluit-Ottawa route is a combination of 80 passenger seats and three cargo pallets.

That’s 33 per cent more passenger space than is available on a similar configuration used with the 737-200 series. And the airline says the 737-300 burns 20 per cent less fuel.

Including its Iqaluit-Ottawa jet, the airline now has 10 300-series jets in its fleet, Bonner said. Seven are used by the airline’s charter division, one operates on the Edmonton-Yellowknife-Inuvik route, and another is held for maintenance coverage.

To mark the aircraft’s inaugural Jan. 2 flight, Canadian North handed out souvenir scarves, hats and mitts, and in Iqaluit, sponsored a free family skate at the Arctic Winter Games arena between 3 p.m. and 5 p.m., with prizes that included a trip for two on Canadian North.

Later this month, Canadian North will announce a new schedule that will essentially take them back to their pre-codeshare schedule, Bonner said.

That means the airline will bring one more Dash 8-100 aircraft into the region, so they can resume serving Pond Inlet, Clyde River, Qikiqtarjuaq and Pangnirtung.

And Bonner, along with Canadian North President Steve Hankirk and Senior Vice President Peter McCart, plan to visit Iqaluit to hold meetings with community leaders and government officials to update them on the airline’s plans.

“The big question is what we’re doing in the Baffin. We’re here to stay,” Bonner said.