“They have to realize how it affects people like us” 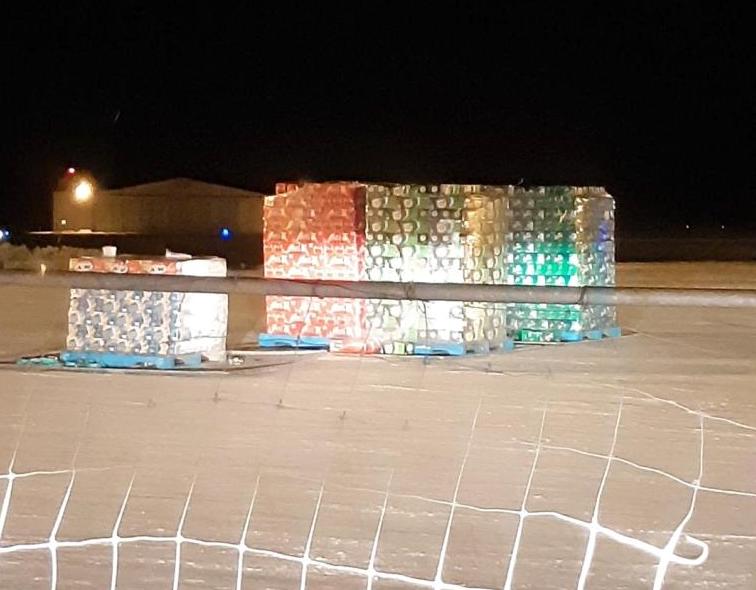 Pallets of soda pop bound for a local business wait on the tarmac of the Cambridge Bay airport on Oct. 19. The nine pallets of pop were offloaded from the first charter from Inuvik carrying materials that never made it after Marine Transportation Services delayed and then cancelled its last barge to the Arctic coast communities of Cambridge Bay, Kugluktuk and Paulatuk. (SUBMITTED PHOTO) 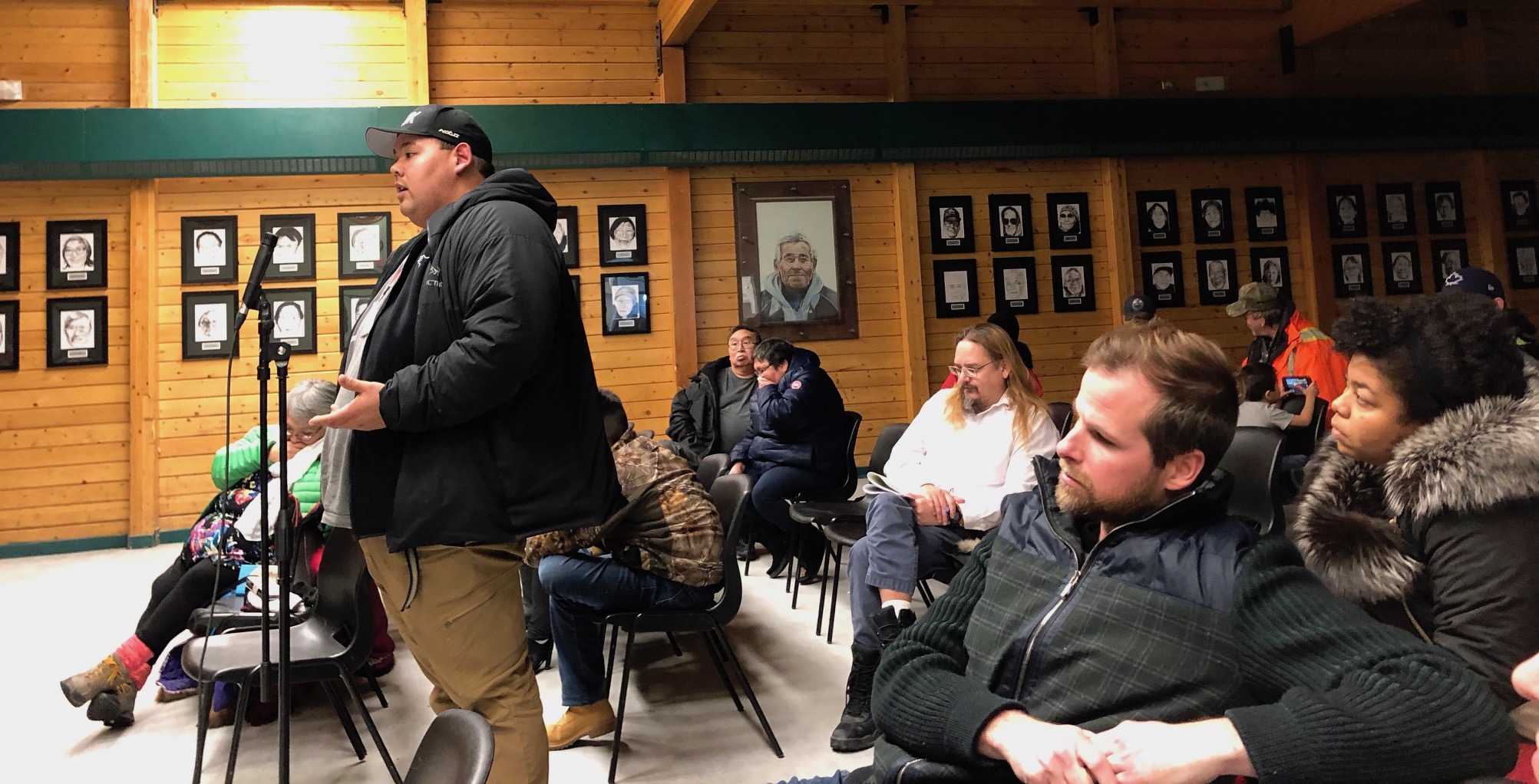 Compensation should be fair for Marine Transportation Services customers who won’t see their trucks due to the company’s barge cancellation, says Angut Pedersen of Cambridge Bay, who stood up on Oct. 15 in a public meeting for MTS customers in the Luke Novoligak Community Hall. (PHOTO BY JANE GEORGE)

CAMBRIDGE BAY—The promised airlift of materials from a cancelled barge in Inuvik is now underway.

But for customers in Cambridge Bay who won’t see their trucks until 2019, the limited airlift, without the Hercules assistance they asked for, has fueled a call for additional compensation to cover damages, such as financial losses, pain and suffering.

That’s despite the terse statement, delivered by John Vandenberg, assistant deputy minister of infrastructure with the Government of the Northwest Territories, at a public meeting last week in Cambridge Bay, that there would be “no compensation” in connection with a decision by government-owned Marine Transportation Services to cancel a barge earlier this month bound for Paulatuk, Kugluktuk and Cambridge Bay.

MTS only said on Oct. 19, on its website, that customers will not be charged any additional fees for airlifted cargo into their communities.

By this coming Friday, three flights will have landed in Cambridge Bay from Inuvik. The first flight delivered nine pallets of soda pop for one business, as well as several orders of groceries.

When staff from the Hamlet of Cambridge Bay saw the Lockheed L-188 Electra arrive at about 9 p.m., on Oct. 19, they went running up to help offload the chlorine needed for municipal water purification. But this wasn’t on the flight.

MTS customer Debbie Gray said she was happy her 12 jars of pickles arrived intact in the first charter, along with other groceries she had stored in her truck. She had worried that the pickles would freeze and burst over the upholstery of her new truck, but she’s not happy that her vehicle will remain in Inuvik until 2019.

MTS said it would not fly anything larger than a snowmobile or all-terrain vehicle into Cambridge Bay, leaving her and about 30 others in the community of about 1,900 without their wheels.

Gray’s truck was a second-hand vehicle, but for others who ordered new pickup trucks there has been even more frustration.

Angut Pedersen continues to pay about $1,300 for a month for his new four-door lightning-blue Ford-150 pickup, which he said was “more than just a normal pickup,” due to the number of options added on.

His payments over the coming year will add up to more than $15,000, “a lot a money for a car I’m not even seeing or driving.”

Without the expected new truck, he’s also unable to sell the other vehicle they’re still paying off, as was the plan.

MTS has told him they will reimburse the $5,000 or so he spent in insurance and freight, and they have said that his truck will be winterized and that the battery will be taken out, so it doesn’t freeze.

But, by the time Pedersen sees his truck, it will be worth about 20 per cent less, due to depreciation.

“They have to realize how it affects people like us,” Pedersen said. “In Cambridge Bay a pickup truck isn’t a fun toy like in Alberta. A pickup truck is like a tool, a resource, in the cold and on the land.”

“Frustration” is how Suzanne Maniyogina describes her mood, three weeks after she learned her new pickup truck wouldn’t be there. She’s still rushing around getting her four children to where they have to be, worried about slipping on the slick streets and taking taxis.

She’s received calls from MTS, but no written offer: she said she had been assured that they will be getting something out by the end of the week.

MTS did agree in an email to businessman Stuart Rostant that his 270,000 pounds of materials for a now-cancelled, planned four-plex, will be barged at no cost in 2019. But he’s still waiting for confirmation on that.

On Monday, contractor Peter Laube of Kalvik Enterprises Inc. still hadn’t heard anything from MTS. As each day goes by, he’s losing time and money, so far at least $20,000 to fly in supplies and $80,000 on a contract he can’t do. He estimates his total losses will add up to more than $350,000.

Laube and some of the others plan to work with the Kitikmeot Chamber of Commerce to link up with a lawyer who can provide oversight on any offers.

To improve communication, MTS has set up toll-free lines in Cambridge Bay, Kugluktuk and Paulatuk.

Local logistics support will also assist in the offloading and delivery of cargo to shippers. MTS also flew in a Cambridge Bay resident to oversee the loading of the charters.