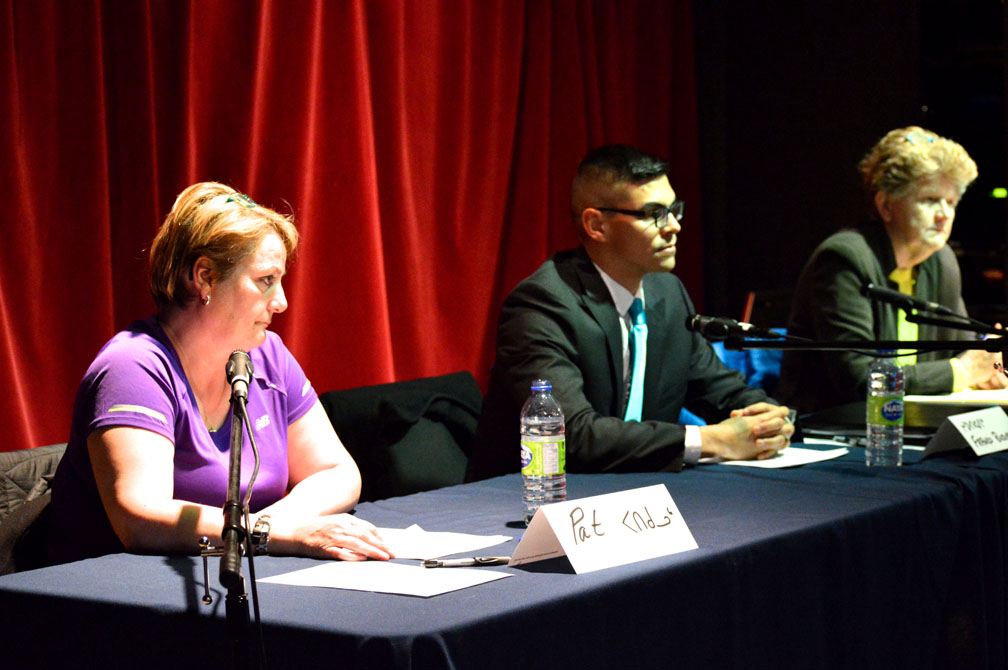 Incumbent MLA Pat Angnakak and challengers Anne Crawford and Franco Buscemi were all given five minutes to pitch their campaigns, before fielding questions drawn at random and read by organizers. Candidates were allowed to respond in their language of choice, but since no live interpretation was available, some candidates answered in both Inuktitut and English.

In one question, the candidates were asked to identify what they think is Nunavut’s biggest “weakness,” and any solution they have for it.

Buscemi said “tolerance of the status quo” is the biggest weakness he sees in the territory.

Being “unable to make the decisions [that] may not be popular but necessary,” Buscemi said, contributes to Nunavut problems like its housing crisis and high suicide rates.

“The remedy is to make a decision,” he said, referring to his experience as a manager at the Inuit-owned Uqsuq Corp. in Iqaluit.

Crawford said Nunavut suffers from a gap between the needs of the community and the programs offered by government.

It’s a problem that can’t be addressed directly, she admitted, but she said solutions would come by diversifying economic incentives in areas like housing, where tax credits could be given to Nunavummiut who can afford to build their own homes and free up additional units for lower income families to rent.

Angnakak said Nunavut’s economy relies too much on federal transfer payments, and the government needs to focus more on generating its own income.

One solution could be selling bonds, Angnakak suggested, or giving institutions more control over their own fundraising, like the independent management board that she proposes for the Qikiqtani General Hospital.

Each candidate had radically different solutions to balancing environmental protection with resource development.

Crawford said she places her faith in the regulatory institutions that oversee development in Nunavut, created by the Nunavut land claims agreement, such as the Nunavut Impact Review Board, the Nunavut Water Board and the Nunavut Planning Commission.

But more work can be done to streamline and further define the roles of each organization, she said.

“We need to be prepared to say no,” she said.

Angnakak said any decisions on resource development in Nunavut must be reached collectively, but noted the success of mining operations in the Kivalliq region.

The government should support Nunavut communities demonstrating the potential to foster fishing industries, by investing in critical infrastructure that could generate a local economy over time, she added.

“There are three operating mines in Nunavut, I don’t think we need any more,” he said, citing consistently low Inuit employment levels at mines, despite signed Inuit Impact Benefit Agreements.

Other regional constants, like the cold, could be harnessed to build internet “server farm” industries, like in Scandinavia, Buscemi suggested, but he did not address Nunavut’s dramatically limited internet bandwidth capacity.

The government should also invest in developing its artistic industries, including performing arts and film, given how many Inuit draw incomes from their art, Buscemi said.