“A fresh focus is needed” 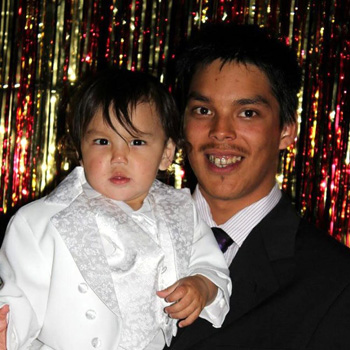 Douglas Aggark may be only 23, but the Chesterfield Inlet administrator and father thinks he has plenty to offer his fellow Nunavummiut.

Aggark is running to be Nunavut Tunngavik Inc.’s vice president this Dec. 8, against incumbent James Eetoolook, who’s held the position for almost as long as Aggark has been alive.

“It definitely makes this a challenge,” said Aggark. “He’s got experience that exceeds my age. But everyone’s talking about getting younger people into politics.

“A fresh focus is needed.”

Aggark thinks he can do that in a way that’s relevant to a territory where more than half of the population is under 25 years of age.

Aggark graduated from Chesterfield Inlet’s Victor Sammurtok school in 2010 before taking a job as a haul truck driver at Agnico Eagle’s Meadowbank gold mine.

But the two-week on, two-weeks off schedule proved difficult when Aggark and his spouse started their family. His sons are now aged two and three.

So Aggark is now is his second year working as the senior administrative officer at the local hamlet office, where he said he’s learned what it means to serve a community.

Drawing from his experience as vice-chair of the Aqigiq hunters and trappers organization, Aggark helped to implement a funding program to subsidize Chesterfield Inlet hunters who harvest caribou for community members who can’t afford to do so themselves.

If he’s elected Dec. 8, Aggark said he wants to consider the elimination of the salary cap for Nunavummiut who apply to the Hunter Support Program.

“I have seen a lot of hunters who provide for themselves and extended family members not be allowed to apply for the program simply on the basis of income,” he said.

Aggark said he’s focused on community well-being. One of his biggest concerns is poverty in Nunavut and how the territory’s birthright organization can help to relieve it.

Social change is inevitable, especially in his home region of Kivalliq: resource development is already bringing more income into the communities, and with that come other impacts, he said.

“I believe that tough decisions will need to be made on a case-by-case, project-by-project basis, and that local communities should be given a larger voice when it comes to resource development,” Aggark said.

Suicide rates among Inuit are “unacceptable,” he said, adding he wants to focus on programs which help to build pride and reinforce self-esteem in his fellow Inuit.

Although young, Aggark said he’s had strong role models to guide his way: his father, Harry Aggark, is mayor of Chesterfield Inlet, and his uncle, Jack Anawak, is a long-time Nunavut politician and former vice-president at NTI.

“I’ve had a lot of encouragement from my family and elders, asking me to run,” he said. “It wasn’t an easy decision to run for a territorial position, but getting that support is big.

“I love representing my community, so this is the next step.”

The new vice president at NTI will now be a full-time job, the organization said. Whoever wins will serve on the organization’s board of directors and executive committee.

The vice president must also chair two NTI board committees, including the Inuit Social and Cultural Development Advisory committee and the Inuit Wildlife and Environment Advisory Committee.

Voters must be Canadian citizens, at least 16 years of age, and enrolled under the Nunavut Land Claims Agreement.

And voters now have five ways to vote in NTI elections; beneficiaries can vote at advance polls on Dec. 1, in person on election day — Dec. 8 — or by mobile poll, proxy vote or mail-in ballot.