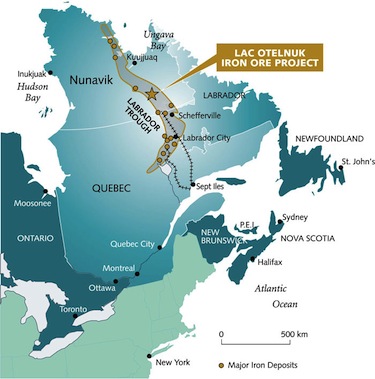 This map shows the location of the iron-rich Lac Otelnuk iron mine project. (FILE PHOTO)

The deal that Adriana has asked its shareholders to accept will see a new joint venture company, owned 60 per cent by WISCO and 40 per cent by Adriana, to push ahead the development of the iron mine at Lac Otelnuk.

“This is an extremely important milestone for Adriana and for the people of Quebec. With the financial support of our new partner, it enables us to accelerate the development of our Lac Otelnuk Project. The project, in conjunction with the government of Quebec’s Plan Nord, will provide a significant economic stimulus for the development of Northern Quebec,” said Allen J. Palmiere, president and chief executive officer of Adriana, said.

Under the terms of the deal, WISCO will shoulder 70 per cent of the estimated $13 billion cost required to develop the Lac Otelnuk iron mine.

And it’s agreed to advance $200 million more if Adriana has trouble borrowing enough cash to move the mine ahead.

WISCO is one of the major subsidiaries of Wuhan Iron & Steel Corp., which wants to produce 50 million tonnes of iron a year from Lac Otelnuk for up to 100 years.

For this, they need an 850-km railway line from Lac Otelnuk to Sept-Iles — as well as major improvements to the port there.

A fact sheet on the Lac Otelnuk deposit, which contains reserves of at least 4.29 billion tonnes of iron ore, calls the deposit “the largest iron ore deposit in Canada” and one of the 15 largest in the world.

But to mine Lac Otelnuk, Adriana will have to find a way to ship the ore out of Lac Otelnuk, which lies about 170 km north of Schefferville, which once served as a centre for the iron mining and processing operations of the Iron Ore Company of Canada.

The next step will be a feasibility study for the mine.

While the new joint venture works on its feasibility study over the next year, the focus will remain on negotiating impact benefit agreements with Nunavik Inuit and First Nations in the project area.