“I want my grandchildren to be able to hunt and fish healthy animals for years to come. That’s what we’re fighting for” 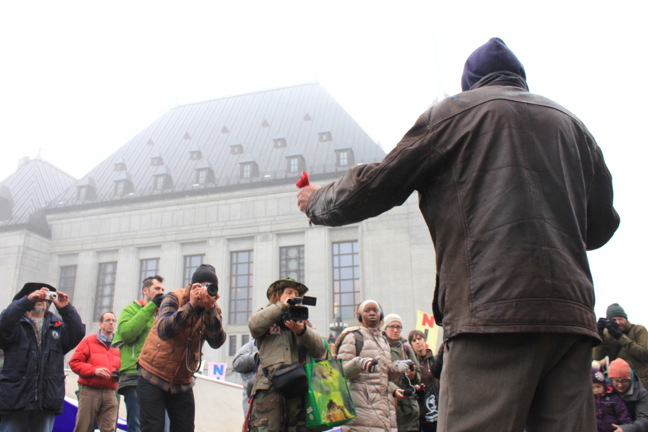 Former Clyde River mayor Jerry Natanine speaks to a crowd in front of the Supreme Court of Canada in Ottawa Nov. 30 at a rally to support Inuit and First Nations rights to Crown consultation. (PHOTO BY LISA GREGOIRE)

The fog enveloping the Supreme Court of Canada building in downtown Ottawa seemed to permeate the main hearing hall Nov. 30 where an army of lawyers and nine Supreme Court justices attempted to answer one big question: who is the Crown?

The Inuit of Clyde River and the Chippewas of the Thames First Nation are appearing jointly before the Supreme Court to argue that the Crown’s duty to consult them, as laid out in Section 35 of the Canadian Constitution, was not met when the Crown delegated that duty to the National Energy Board.

In other words, they say, the NEB signed no treaty or land claim and therefore, the NEB, as a quasi-juridical body, is not the Crown.

And if that’s the case, then the NEB’s decisions, to approve projects that could potentially impact the Chippewas and Baffin Inuit, should be overturned.

Jerry Natanine, former mayor of Clyde River, the Hamlet of Clyde River and the Nammautaq Hunters and Trappers Organization are fighting to stop a five-year seismic blasting project off the east coast of Baffin Island which was approved by the NEB in 2014.

They are concerned that the blasting could impact marine mammals and fish they rely on for food and they say that consultations, some of which were conducted by the proponent, were inadequate.

Natanine attended a pre-hearing rally in front of the Supreme Court Nov. 30 and spoke to the 100 or so supporters who gathered.

“We care about our water because that’s where our lives are. Our food is in the water,” he said to cheers.

“When we were growing up, no one owned the water. No one owned the land. And now like, it’s governments and companies, corporations coming in. They have to own the water. They think it’s theirs. It’s not. It’s ours. It’s for our children.

“I want my grandchildren to be able to hunt and fish healthy animals for years to come. That’s what we’re fighting for, for all humanity. We have to be right with nature.”

The morning portion of the Nov. 30 day-long court hearing was devoted to the Chippewa case and included submissions from the Chippewas, supporting First Nation intervenors and lawyers for the respondents: Enbridge Pipelines Ltd., the Attorney General of Canada, the NEB and along with government and industry intervenors.

The NEB granted Enbridge permission in 2014 to reverse and expand the flow of heavy crude oil through a 639-kilometres section of their Line 9 pipeline, which runs from North Westover, Ont., to a Montreal refinery and through Chippewa traditional territory.

Although the pipeline has existed since 1976, the Chippewas are nonetheless arguing that any changes to that project require full consultation.

“The honour of the Crown cannot be delegated,” said the Chippewas’ lawyer, David Nahwegahbow.

Douglas Crowther, lawyer for Enbridge, argued that the NEB, which has expertise in pipeline operation and design, is well suited to undertake this kind of consultation.

Crowther also argued that consultation with the Chippewas was robust, began early and that Enbridge staff were designated to reach out to members of the First Nation with explanations on how they could participate and how to access funding as necessary.

Various justices asked questions during the morning hearing, mostly about that sticky question of whether the NEB has the power to conduct consultation, delegate consultation to project proponents and then assess the quality of that consultation.

At one point, Justice Michael Moldaver asked whether it was appropriate to allow a body to assess the quality of its own consultation—something the appellants questioned.

But Peter Southey, lawyer for the Attorney General of Canada, said those decisions are always subject to judicial review.

Chief Justice Beverley McLauchlin said she was “struggling” with the “murky area” surrounding whether the NEB could be considered the Crown. “I’m really confused about this,” she said. “It’s an area that’s worrying me.”

The NEB has suffered its share of criticism from environmental groups and others who claim the board is pro-industry.

The NEB’s website lists eight members and five temporary members, many of whom have worked in the energy sector, either directly or as consultants.

The NEB was forced to suspend hearings into TransCanada’s Energy East pipeline in August after news reports revealed two of three board members presiding over the public hearing had met with former Quebec premier Jean Charest, a paid TransCanada lobbyist, in 2015.

Return to Nunatsiaqonline.ca tomorrow for coverage of the Inuit portion of the hearing.