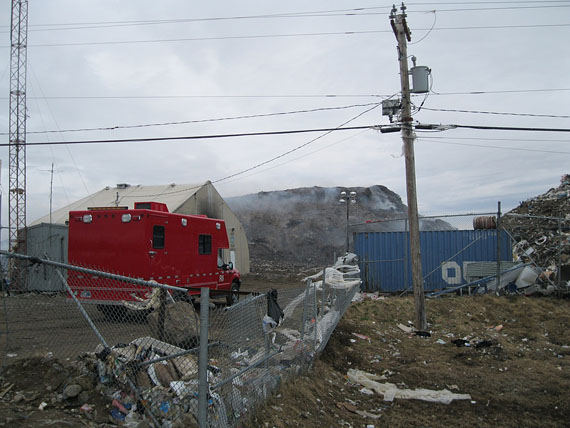 A fire truck stands watch over Iqaluit’s landfill fire June 8. Concern about smoke hazards and quality of life led city council to pass a motion June 11 that orders the fire chief to extinguish the smouldering pile. (PHOTO BY PETER VARGA)

Iqaluit City Council reversed a previous decision to let Iqaluit’s landfill fire burn itself out and ordered fire chief Luc Grandmaison to extinguish a smouldering, smoking heap of garbage more than three weeks after it went up in flames, under a motion passed June 11.

“What worries me most is the quality of life, and not just the potential of getting sick or being sick,” said Coun. Kenny Bell, pointing to potential, but unknown health hazards posed by smoke from the fire.

Bell tabled the motion to order the fire department to put out the fire at council’s regular meeting June 11. It passed by three votes to two.

The motion calls for the fire chief “to put the fire out in a way that he sees fit,” Bell said, with help from experts who specialize in dump fires and the Government of Nunavut, “and to do so as soon as possible.”

Federal officials from Environment Canada and Health Canada have since joined in the effort to assess environmental risks posed by the fire, which is what the department must first do before it comes up with options of how to put it out.

“The goal is to extinguish it, but I still need to bring options to council,” he said after the council meeting.

Foul smelling smoke bearing unknown contaminants has billowed from a single large pile at the dump since flames first broke out May 20.

The fire department has limited the fire to the pile, which is about as large as the length and width of a football field, and “four storeys high,” according to Grandmaison.

The territorial department of health has issued health advisories warning residents to avoid breathing in the smoke on days when westerly winds blow it into the city.

“Council’s been getting a backlash all the time,” said Coun. Terry Dobbin. “Schools are being closed, kids told to stay inside. Summer’s here. People want to get outside and enjoy the pristine air.”

Council followed advice from the fire department and public works to let the pile burn itself out the day it began, when the city concluded it did not have the resources to put out the blaze.

Moreover, according to Grandmaison and public works officers, efforts to extinguish the fire with water would jeopardize city equipment, the safety of emergency workers, and have unknown impacts on the waters surrounding the dump, which faces Koojesse Inlet.

As plans to let the fire burn itself out showed signs of success, concerns about air quality grew.

Promises from the territorial government that Health Canada and Environment Canada would bring air quality monitoring equipment into the city materialized June 7, when emergency officers from Environment Canada arrived in the city.

The federal agency, with Health Canada, will follow up June 13 when they will deliver equipment to assess and monitor more complex hazardous contaminants in the air, for the duration of the dump fire.

Although the federal effort was to assess health hazards for the territorial department of health, and not extinguish the fire, Environment Canada and Health Canada agreed with the city’s decision to let the fire burn itself out, instead of extinguishing it.

Recalling a joint meeting that included city and government officials from the territorial departments of health and environment, with their federal counterparts, Coun. Romeyn Stevenson said “it was asked of every expert around the table whether we should put out the fire, and people didn’t think we should,” he said.

Concerns centred around the use of water to extinguish the blaze.

On top of unknown hazards to surrounding waters, “all the experts are saying, as soon as you start intervening in the burning process, we will create more smoke, the ashes from this fire will rise, and they will deposit,” Grandmaison said.

Grandmaison compared the smouldering landfill pile to a four-storey building with the length and width of a football field, measuring 100 metres by 60 metres.

“It would require at least a million gallons of water for this building,” he said. “but this is not a building. It’s four storeys of combustibles.”

Given an order to extinguish the fire, the department would “continue to do what we’re doing now, to work with the emergency measures organization, and find the best way to extinguish it,” Grandmaison said.

Short of flooding, Grandmaison said the department could smother the pile in a tarp, which could prevent oxygen from feeding the flames and combustion.

The fire chief said the city’s efforts to control the fire have cost the city about $300,000 so far. Approximately $45,000 of this covered the 569 man-hours needed to control to fire over three weeks. Grandmaison reported $233,000 went to Nunavut Excavating, which the city contracted to “create space and help control the fire” at the landfill.

The city has used about 170,000 litres of water to control the blaze so far. Grandmaison compared this to the city’s last major dump fire in 2010, which took on more than 946,000 litres to extinguish a burning pile that was half the size.