At March 30 rally, union bosses were to burn employer’s letter to workers 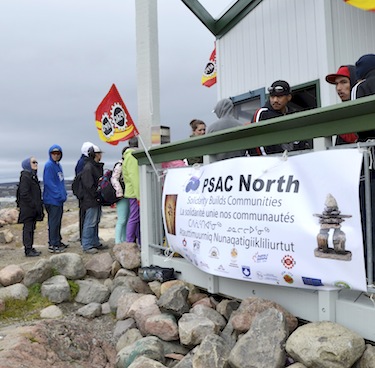 PSAC members line up for food at a 2013 Labour Day picnic at Sylvia Grinnell Park. PSAC officials will hold a rally at Iqaluit City Hall at 10:00 a.m. today to burn a letter the city sent this week to its unionized employees. Read more later. (FILE PHOTO)

The union that represents workers at the cash-poor City of Iqaluit will not buy into their employer’s tight-fisted plan to eliminate its deficit, the Public Service Alliance of Canada said March 29 in a statement.

To that end, at a rally set for 10 a.m., March 30 at Iqaluit City Hall, union officials were to have burned a letter the city attached to employee pay stubs this week.

The letter sets out the gist of the city’s bargaining position in talks aimed at a new wage-benefit deal.

Over seven days of negotiations that started Jan. 15, the city proposed a two-year wage freeze, a two-year freeze on salary grid increases and reductions in vacation travel assistance and other benefits, the letter said.

Until now, the union has been reluctant to comment on those collective agreement negotiations. But they’ve now broken the silence.

“This is an act of intimidation aimed at city employees, plain and simple. The employer wants to silence its workers, but their actions will only unify them,” said Jack Bourassa, the northern regional executive vice president for the Public Service Alliance of Canada.

The city’s workers are represented by local 6 of the Nunavut Employees Union, which is a component of PSAC.

In the letter, the city said the City, Town and Villages Act requires them to eliminate any deficit by the end of the next fiscal year, and that the city is now in contravention of that territorial law.

“The current situation is financially unsustainable for the City, particularly given the legislative requirement for the City to eliminate its deficit at the end of a fiscal year by the end of the next fiscal year,” the letter to employees said.

This past November, the newly-elected Iqaluit City Council, after discovering the dire financial situation they inherited from the previous council, passed five bylaws aimed at bringing them into compliance with territorial law and to eliminate a deficit then estimated at about $8.2 million.

Out of every dollar the city receives, they spend 59.78 cents on employee wages and benefits, the city’s letter to employees said.

The city’s letter also suggests that if the deficit is not eliminated, the city fears the Government of Nunavut might remove the current council and administration and appoint an unelected administrator to run the city.

“In addition, on January 30, 2015, the Iqaluit Chamber of Commerce asked City Council not to increase taxes until a fiscal plan was developed to eliminate the deficit, stating that continual abuse of the Act may open the door for the Government of Nunavut to put the City under Administration similar to the early 1990’s,” the letter said.

The city has already announced a wage-freeze for about 10 to 15 non-union employees.

As for unionized workers, the city’s letter says that to eliminate the city’s deficit by December 2017, the city’s offer to the union includes the following:

• a freeze on incremental increases set out in the current salary grid;

• offer a VTA only once a year;