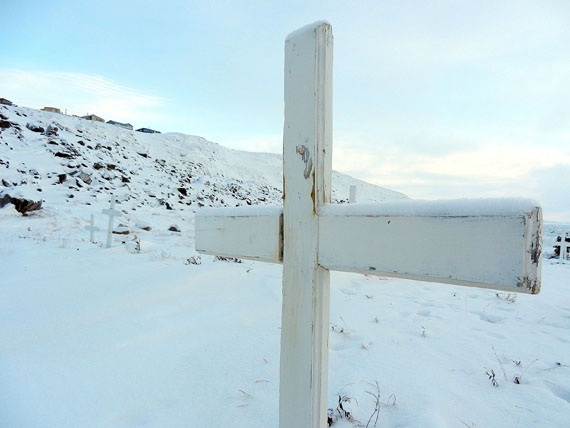 Iqaluit’s current cemetery, located by the beach in the south-east section of central Iqaluit, is running out of burial plots. (FILE PHOTO)

The clock is ticking on the City of Iqaluit’s desire to develop a new cemetery.

Iqaluit has two years in which to build a new cemetery before the old one fills up — and plans are in the works to finally get a new site up and running by fall of 2013.

A tentative timeline for development of a new cemetery, located on Road to Nowhere, was issued by the city’s director of engineering and sustainability, Meagan Leach, at an engineering committee of the whole meeting June 25.

An engineering review is underway for the site, which is more than half completed after construction started in 2010.

But construction was halted due to “terrain issues” that saw a big reduction in number of potential burial plots.

The engineering review is intended to identify what can or can’t work at the site, construction costs, and time constraints.

After the review is done, there will likely be three options for city council to consider: complete the cemetery with the current design, implement a new optimized design, or develop another site.

“In 2010, the access roads, the stone ring and five of the seven pods were completed. Council put this project on hold due to concerns over site suitability and rising costs,” Leach said.

It’s unknown how many burial plots will be available inside the new cemetery after the review, but Leach said the goal is to ensure 20 years of capacity.

If all goes to plan, an options review will be made in the fall, detailed design would happen in the winter, and construction would take place next summer.

In the mean time, the city has found more space at the current cemetery to meet demand.

They’re in the process of converting a “turn-around area” into more plots, and 10 new spots next to this turn around area as well.

The city has been seeking a new cemetery since at least 2004, and almost didn’t get the go ahead to approve $108,000 in emergency funding for the Road to Nowhere cemetery in 2010, which had to go to a tie-breaker in city council.

The city will know the estimated cost of completing of the new cemetery after an engineering review is completed and council selects a preferred option, Leach said.