Ships travelling in Arctic will get better info, Transportation Safety Board says 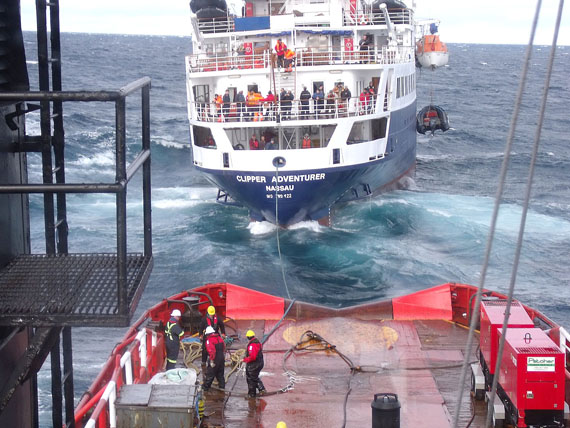 As a result of the Transportation Safety Board investigation in the August 2010 grounding of the Clipper Adventurer, the Canadhian Coast Guard as committed to providing all vessels entering Arctic waters with safety information via its NORDREG vessel reporting system starting in June 2012. The Canadian Hydrographic Service will also establish a procedure so that navigational charts for Canada’s Arctic will be marked with reported hazards to navigation. (FILE PHOTO)

Highlighting the need for safer navigation in Canada’s Arctic, the Transportation Safety Board of Canada released its report April 26 into the August 2010 grounding of the cruise ship, Clipper Adventurer, in Coronation Gulf.

“Our investigation determined there were problems with the vessel’s voyage planning but we also found that key safety information was not being proactively provided to vessels transiting the Arctic,” said the TSB Investigator-in-Charge, Eric Asselin, in an April 26 news release.

“Traffic in these fragile waters is increasing. Given the remoteness and unique navigation challenges, when vessels enter Arctic waters it is essential they know about hazards to navigation.”

On Aug. 14, 2010, the Clipper Adventurer departed Kangerlussuaq, Greenland, bound for Kugluktuk in western Nunavut. While transiting in mainly uncharted waters, the vessel ran aground on a shoal in Coronation Gulf.

All 128 passengers were safely evacuated from the ship, the TSB noted.

The shoal had been discovered by the Canadian Coast Guard vessel Sir Wilfrid Laurier in 2007 while it was conducting scientific research.

However, the shoal was not marked on navigational charts and, upon entering Arctic waters, the Clipper Adventurer was not advised of a possible shoal in that location, the TSB said.

As a result of the TSB investigation, the Coast Guard has committed to providing all vessels entering Arctic waters with “crucial safety information” via its NORDREG vessel reporting system, starting in June 2012, the TSB release said.

The Canadian Hydrographic Service will establish a procedure so that navigational charts for Canada’s Arctic will be marked with reported hazards to navigation. This process is to be implemented in 2013, the TSB said.

“Our goal is to improve marine safety,” said Asselin. “I can say with certainty that this investigation will lead to improved safety in Canada’s Arctic waters.”

You can read the entire report here.