“It feels like we are taking back our culture” 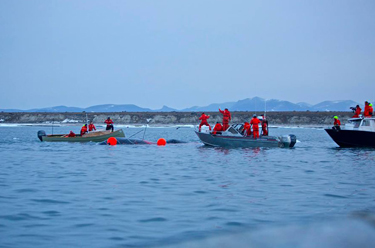 They were some of the most intense hours in Clyde River mayor Jerry Natanine’s life.

Three days into the community’s bowhead whale hunt, which had so far been marked by fog and icy conditions, hunt captain David Iqaqrialuk spotted a whale from the crew’s camp about 20 kilometres outside of the Baffin community.

Natanine and a crew of about 30 hunters — including two women — set out in different boats.

After the first harpoon was thrown into the whale, the whale fought back, writhing and thrashing its fin tail, almost capsizing one crew’s boat in the process.

But hunters persisted, striking the 54-foot whale again, with harpoons and a Penthrite explosive device.

An hour and 45 minutes later, in the early hours of Aug. 3, Clyde River hunters celebrated their first modern-day bowhead catch.

“It was such a celebration, I lost my voice that night,” Natanine said. “The thrill, the excitement — it’s surreal for us.

“We’ve been talking about harvesting bowheads and the fact that it hasn’t happened for so long,” he said. “It feels like we are taking back our culture.”

Although Nunavut communities have harvested bowheads since the mid-1990s, this was a first for Clyde River. Natanine also believes it may have been the first time the bowhead hunt counted female crew members — harpooners Meena Tussagat and Cynthia Panipak.

“Women applied (to be on the crew) and we thought ‘Why not?’” Natanine said. “This was a first for us and we wanted to include everyone.”

For the last few days, harvesters have been butchering the 54-foot long animal at the site about 16 kilometres outside the community, to ensure the carcass doesn’t attract polar bear traffic.

Natanine said people are enjoying eating the raw maktaaq, while others are starting to experiment with other ways to prepare the whale meat.

He said the community hasn’t decided what to do with all the maktaaq or if it will distribute the meat outside the community.

But an outside organization is sharing in the celebration anyway: Greenpeace released a statement Aug. 5 to acknowledge Clyde River’s historic bowhead hunt.

“Baffin Bay is a critical habitat for bowhead whales, which brings into question the National Energy Board’s recent approval of seismic testing for oil and gas exploration in those same waters,” Khan said.

“If seismic testing is permitted, marine mammals including bowhead whales could suffer permanent physical damage and a disruption of their migration patterns, which could have adverse effects on the population and on the Inuit peoples’ ability to carry out their sustainable, traditional hunt.”

Inuit in Clyde River fear the underwater noise could affect the marine life they have hunted for centuries by interfering with marine mammal migration routes.

A lawyer representing groups in Clyde River – with support from Greenpeace – filed an application at the Federal Court of Appeal July 28 that seeks a judicial review of a recent decision.

Natanine noted the significance of Clyde River’s hunt as the community challenges the NEB’s decision.

“The time’s are a changing and I’m glad to be a part of it,” Natanine said.

Nunavut hosts a bowhead hunt in each of its three regions each year; in the Kivalliq, hunters left Chesterfield Inlet last week in search of their bowhead whale, while crews in Kugaaruk will harvest the Kitikmeot region’s whale this year.

But the number of whales harvested in Nunavut could change; whaling groups in the Baffin and Kivalliq regions have requested the federal department of fisheries and oceans increase their quotas from one to two whales each year.