Coalition of Nunavut DEAs unsure of future under proposed council

“We’re here to listen and work with them” 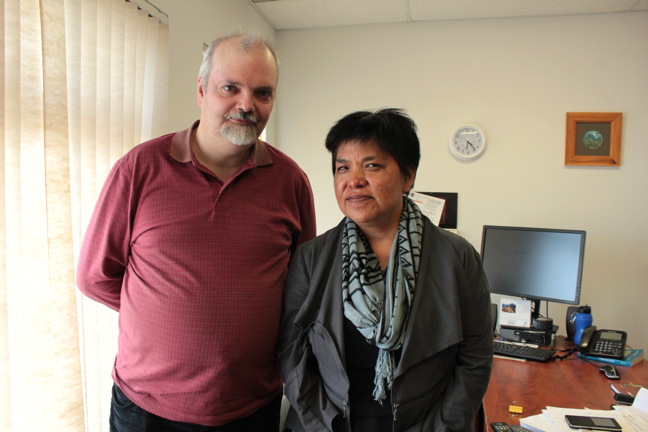 Doug Workman, then vice-chair of the Coalition of Nunavut DEAs, and the organization’s executive director, Nikki Eegeesiak, are pictured in Iqaluit last summer ahead of Education Act consultations. (FILE PHOTO)

The Nunavut Coalition of District Education Authorities says it’s been left in the dark on a proposal to create a new territory-wide DEA Council, the coalition said this week.

Nunavut’s Department of Education took out a two-page advertisement in local print media to publish the proposal earlier this month—one of many amendments in the works, as the government works to revamp its Education Act ahead of the October territorial election.

In the update, Education Minister Paul Quassa said the new DEA Council would be independent from the Government of Nunavut and directed by elected DEA members.

The proposed council appears to replace the Coalition of Nunavut DEAs, which currently advocates for Nunavut’s 26 elected DEAs.

The proposal doesn’t come as a surprise; the department has said in the past it is eyeing a more centralized administration of education.

“All the communities were like-minded in saying we wanted to see the regional school boards [stay] in place,” Adams said. “Instead of one central department of education making decisions for us.”

But, above all, the coalition feels as though it’s been left out of the process, Adams said.

“We’re always left scrambling with more questions than answers,” she said. “All the meanwhile, we’re trying to work with them.”

Adams doesn’t want to comment on the proposal itself; she said the coalition still needs to hear more details about the proposed council to understand what it means.

Education Minister Paul Quassa has not been available to speak to Nunatsiaq News to provide more details.

The coalition last met with education department officials during its annual general meeting in October 2016.

During that meeting, the Department of Education presented the coalition with documents that outlined its rough plans for changes to the Education Act, said Nikki Eegeesiak, the coalition’s executive director.

But DEA representatives wanted a chance to take those plans back to the communities for further consultation before the government moved forward with those plans, she said.

“All the communities said they were not comfortable saying yay or nay, because they have to go back to their communities to discuss it with their DEA members,” Eegeesiak said.

And the coalition wasn’t left with a clear idea of the next steps in the process.

“We don’t know the final details of this new council,” Eegeesiak said, “and when the amended legislation will be presented to the DEAs, to see if this will strengthen community involvement in education.”

“They want the new council to provide annual reports, which is fine, as long as the department will provide training,” she said.

“We need information on what kind of support the new council will get, in terms of implementing and delivering that.”

It’s unclear what will happen to the coalition as a body, she said, which currently employs Eegeesiak and one other staff member.

In his published message to Nunavummiut earlier this month, Quassa also committed the GN to amending subsection 8(1) of the Inuit Language Protection Act in a way that would clarify, “the right of Inuit parents to have the majority of instruction in the Inuit language.”

Quassa said the amendments would help his department make clear what subjects should be taught in Inuktut.

Other amendments to the Act include increased standardization across the territory including instruction minutes and language of instruction by subject and grade level.

But even that plan concerns the coalition, which notes that each community and region has varying needs and use different dialects. That impacts the type of learning materials required in each school.

“They can’t put us all in one boat and say one size fits all,” Adams said. “But tell us how it will work, and we’re here to listen and work with them.”